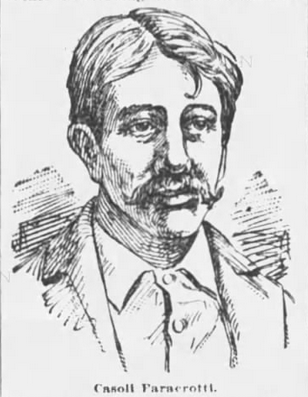 At the turn of the last century, one of the roughest neighborhoods of New York was Five Points-- a bubbling cauldron of immigrant gangs, political corruption, overcrowded slums, filth and disease. One particularly rowdy area within Five Points was Mulberry Bend (or, as it was referred to be locals, "The Bend"). The Bend was a maze of tenement-lined streets and treacherous alleys with colorful names such as Bandit's Roost and Ragpicker's Row. In 1911, Mulberry Bend was demolished; Columbus Park now occupies the plot of real estate that was once known as the most dangerous and violent place in America.


During the late 1890s, whenever the tiny, friendless fruit merchant in dirty rags pushed his cart around Mulberry Bend, the crowds would immediately disperse. The more religious among them would mutter prayers and turn away, while the superstitious clutched their talismans and rubbed the feet of dead rabbits. Even the children scurried away in fright, screaming their warning: "The banana man is coming! Be quiet, or he'll kill you!"

Paracrotti was not a criminal mastermind, a crooked law patrolman or a man of violence, but he was what the Italians refer to as a jettatore-- a jinx, a bringer of bad luck, possessor of the dreaded "evil eye". And it has been written that more than 50 persons met their demise simply by being acquainted with him. For this reason Paracrotti was a lonely man; no man wanted to be his friend, no woman wanted to marry him, and even inside the Catholic church on Roosevelt Street he was relegated to the back pew, shunned as if he were the carrier of a deadly and highly contagious disease.


The story of the lonely life of Casoli Paracrotti begins in southern Italy. At the age of sixteen, his parents hired him out to a wealthy nobleman as a gamekeeper, tasked with the job of keeping poachers and trespassers at bay. Paracrotti, who was the creative and inventive sort, tackled the job with youthful enthusiasm, and one day he proudly showed off his new invention to his employer. It was a booby trap, designed to set off a frightful but nonlethal explosion when triggered by an unsuspecting poacher. While demonstrating his contraption it accidentally exploded, killing two stable hands and the only son of the wealthy nobleman. Paracrotti lost two of his own fingers in the blast.

The young man, fearing revenge from his employer, fled from the estate and sought shelter with his brother and brother-in-law in Terra del Mauro, where they operated a stagecoach line. Paracrotti earned his keep as a stable boy. One day, shortly after his arrival, Paracrotti became enraged at an ill-tempered horse. In his rage he picked up a stone to throw, but missed the horse and struck his brother in the temple by accident, killing him instantly. He was arrested but eventually released, and returned to work for his brother-in-law.

As fate would have it, the brother-in-law died a horrible, agonizing death after drinking pesticide which Paracrotti had poured into an empty bottle that had previously held brandy. The brother-in-law, who stumbled across the bottle while rummaging through the barn, mistook it for liquor. Once again the young man was arrested and charged with murder, only to be acquitted. However, by this time the young man's reputation as a jinx had spread and Paracrotti was ordered by authorities to leave town and never come back.

He eventually found work as a laborer and joined a crew of workmen who were engaged in building a tunnel designed to carry water. Through a misunderstanding or miscalculation, Paracrotti made an error that resulted in 21 men being drowned. He fled once again, eventually settling in Pazznoli, where he secured employment aboard a cargo ship. 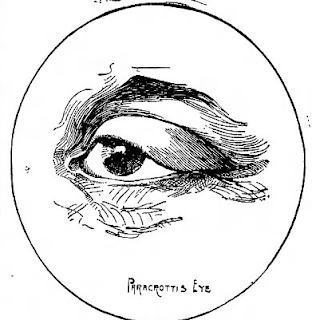 On the third day of his first voyage Paracrotti was stricken with fever and quarantined, without access to food or water. During the night, after his guard had fallen asleep, Paracrotti crept away from his quarters and located the ship's water tank. Overcome with thirst, he plunged his head into the water and drank his fill-- unintentionally contaminating the water supply with his germs. Illness soon spread among the crew, claiming the lives of six.

When the cargo ship returned to shore the survivors were taken to a local hospital. Paracrotti was confronted by an angry crewman who assaulted him, nearly beating him to death. He was too small in stature and too weak from illness to defend himself, so one his shipmates rushed to his defense. During the ensuing quarrel knives were drawn, and Paracrotti's defender was stabbed to death, thus becoming the 32nd victim of the dreaded jettatore. It was this event which made him decide to leave Italy for good and begin a new life in America.

It was March of 1895 when Casoli Paracrotti arrived in New York, and the events of his first day are recorded thusly: 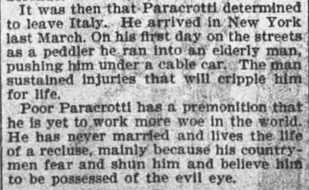 Paracrotti's arrival in Five Points occurred during some of the most violent and turbulent times in the history of New York City, a time when death seemed to lurk behind every door and hide in the shadows of every dreary rat-infested alley of Mulberry Bend. So who can say with any degree of certainly just how many more unfortunate victims died after crossing the path of the tiny Italian banana vendor?