The Curious History of the Magic 8-Ball 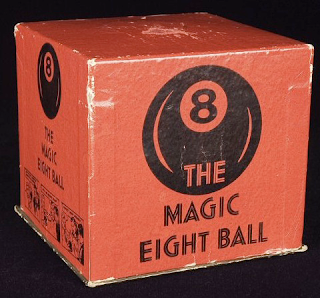 With the possible exception of the Ouija board, the best-selling prognostication device in American history is the Magic 8-Ball. According to Mattel, over one million Magic 8-Balls are sold each year. I've owned one, and there's a good chance that you have too. However, while almost every man, woman and child is familiar with this beloved toy, few people are aware of its curious history.

Here are some truly fascinating facts about the Magic 8-Ball and its inventor, Albert Carter.

1. Carter was the son of a real-life fortune-teller 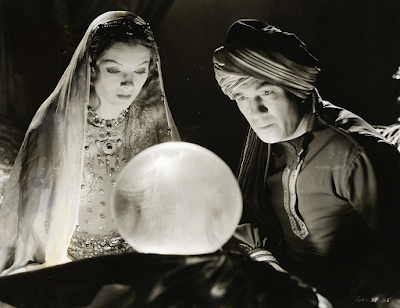 The inspiration behind Albert Carter's toy was a divination device used by his mother, Mary, who eked out a living as a professional clairvoyant in Cincinnati, Ohio, during the early 1900s. It was based on a tool used by psychics for "automatic writing"-- the supposedly supernatural phenomenon of jotting down words without conscious thought.

2. Carter's toy was originally known as the Syco-Seer

In 1945, Carter's invention hit toy store shelves, although his original creation bore little resemblance to the fortune-telling toy we know and love today. The Syco-Seer operated on the same principle as the Magic 8-Ball, though it was not round. It was a 7-inch tube filled with a dark inky substance and contained a traditional 6-sided die with various answers printed on the sides.


3. Alabe Crafts is a mash-up of the names of Carter and his cousin 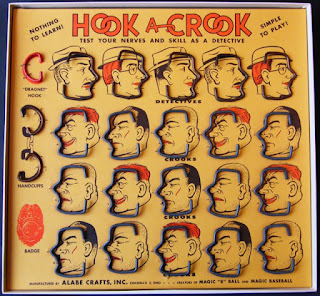 The Magic 8-Ball design we are all familiar with today was created not by Albert Carter, but a mechanical engineer by the name of Abe Bookman (who was also his cousin). In the early days, Magic 8-Balls were manufactured by a company known as Alabe Crafts, which is a name formed by combining the names of the company's founders: Al (Carter) and Abe (Bookman).

Alabe Crafts enjoyed considerable popularity as a novelty company during its heyday in the 1940s and 50s, producing such classic toys as Hook-a-Crook and 3D Chess. Less popular, however was "Poverty Pup"-- a dog-shaped piggy bank which debuted in 1967. Alabe Crafts was sold to Ideal a few years later, and Ideal was then sold to Tyco Toys. Tyco was purchased by Mattel in 1997.

4. Albert Carter never actually got to see a Magic 8-Ball


Although Carter is credited as the toy's inventor, he never actually got to see the familiar black-and-white orb known as the Magic 8-Ball. Albert passed away in 1948, a couple of years before his cousin perfected the design. At the time of his demise, the toy was still known as the Syco-Seer. 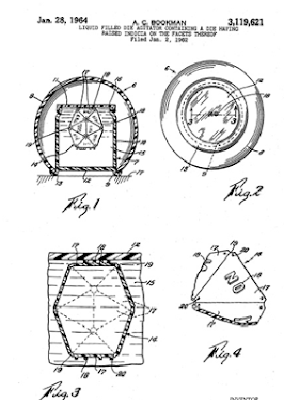 As far as the U.S. Patent Office is concerned, there's no such thing as a Magic 8-Ball. Abe Bookman's patent (#3,119,621) was officially granted on January 28, 1964, under the heading: Liquid Filled Die Agitator Containing a Die Having Raised Indicia on the Facets Thereof.

As to the chemical composition of the mysterious blue liquid? It's just a mixture of alcohol and dye.


6. Abe and Al were a couple of optimistic fellas


Although the Magic 8-Ball has undergone a handful of minor tweaks during its long history, one of the toy's most enduring and recognizable features is its 20-sided icosahedron die. Of the 20 possible answers given by the Magic 8-Ball, 10 are affirmative, 5 are negative and 5 are neutral.

7. The Magic 8-Ball wouldn't have existed without Brunswick Billiards.

By the early 1950s, sales of the Syco-Seer had plummeted and the company founded by the two cousins from Cincinnati seemed to be on the verge of financial ruin. That is, until another Cincinnati company-- Brunswick Billiards-- approached Abe Bookman and asked him to create a billiard ball-shaped version of the Syco-Seer for a promotional campaign. In November of 1951 Alabe began marketing the toy as the "Magic 8-Ball", with a retail price of $1.98. This, coincidentally, was the same price as its predecessor, the Syco-Seer. The redesigned product was an instant hit, and the rest is history.
automatic writing clairvoyant Strange History trivia