The Falls Church House of Horrors Most people would agree that houses seem to have a spirit and personality all their own. Like the people who dwell inside of them, some houses seem to attract joy and happiness, while others seem to attract tragedy. Some may chalk this up to paranormal phenomenon, while the more skeptical among us may claim that it's nothing more than bad luck.

Yet, there are some houses with such dark histories that even the most skeptical person may have a hard time explaining it. One such house stood in Falls Church, Virginia, and this house was the scene of several unimaginable tragedies.

On a rainy Sunday morning in May of 1907, hundreds of curiosity seekers braved the mud and trudged their way up to the top of hill to obtain a glimpse not of the little white frame house, but the lifeless bodies of Silas Putnam and his housekeeper, Mrs. Emma Beavers-- victims of a shockingly brutal crime that had occurred the day before.

While murders and suicides always drew a good crowd of gawkers in those days, what made this event extraordinary was that the simple white frame farmhouse owned by Silas Putnam had been the scene of previous tragedies, leading many of the residents of Falls Church to believe that the property was cursed. Silas Putnam's third wife had been killed instantly after the house was struck by lightning in July of 1904, and one of Silas' daughters committed suicide inside the house four years earlier.

Tragically, Silas and Mrs. Emma Beavers were shot to death in the very same room where 15-year-old Nellie Putnam ended her own life on the afternoon of December 9, 1900, by sending a pistol ball through her brain. She had been raped by a man named Thomas Howe, and it was reported that the mental strain of the court proceedings had been too much for the poor girl to bear.

Nellie's mother (Silas Putnam's second wife), had preceded her daughter in death by just seven months, passing away at the age of 35 after a lengthy battle with tuberculosis. His third wife, Eliza, died from tuberculosis in 1904.

Silas, who fathered fourteen children, witnessed the burial of five of his offspring, and buried three wives, before killing himself and his housekeeper, Emma Beavers, after she turned down his proposal to become his fourth wife.

And, strangely, had it not been for another violent tragedy-- one that Putnam had nothing to do with-- the paths of Silas and Mrs. Beavers might never have crossed. 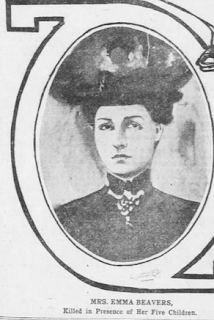 Willis Beavers, a Fairfax County farmer, was found dead on June 22, 1905. He had just quarreled with his wife, Emma, and had threatened to kill her and their five children when a neighbor, William Simpson, intervened. The altercation between the drunken farmer and the chivalrous neighbor came to an end shortly after Beaver grabbed a rifle and fired at Simpson. The shot missed, and Simpson grabbed the rifle from Beaver and beat him over the head with it before fleeing the scene (Simpson was later cleared of any wrongdoing, having acted in self-defense).

Left with five mouths to feed, Emma was forced to find a job, and soon obtained employment as a housekeeper for Silas Putnam, who knew all too well the pain of losing a spouse suddenly. Bound by a common tragic thread, Silas and Emma quickly became friends, but while Silas' feelings for his housekeeper deepened, Emma continued to turn down her employer's romantic overtures.

Silas, it was said, had proposed marriage to Emma several times, and each time he was refused. Yet he persisted, until the day came when Emma finally consented to the proposition-- on one condition.
"Arrange to give my children one-third of your property," she said, "and I'll marry you."

Putnam was outraged by this stipulation. "How can I make provisions for your children when I've got nine of my own?" he bellowed. The argument got so heated that Silas ordered Emma to leave the house, and when she refused Silas threatened to call the sheriff and have her forcibly removed. It was during this time that Silas had taken his old pistol-- the same one his daughter had used to kill herself-- to a blacksmith's shop for repairs, telling the blacksmith that he may have reason to use the weapon before long.

On Saturday, May 25, 1907, Emma Beavers and her children had gone to Alexandria to do some shopping, when her eldest daughter, May, noticed that there was a man following them from store to store. Without looking, Emma knew that it was Silas Putnam.

"Why is is he following us?" asked May.

"Because he's jealous," replied Emma, who then revealed to her children the recent argument over the terms of the proposed marriage. "And he wants to see if any man speaks to me."

Emma and her children continued to shop, and Silas-- who, by this time, was quite inebriated-- continued to follow them. The Beavers' then started their drive over the muddy road back to Munson's Hill and Silas followed them on horseback. It was at this point Emma expressed to her children her fear that Silas might do something drastic. "If anything happens to me tonight, seek the assistance of your aunt," she whispered, writing down the address of Miss Lizzie Beavers, who lived nearby.

When the Beavers' carriage reached Bailey's Crossroads-- just a mile or so from home-- Silas Putnam had caught up to them, but he only followed them in silence until they reached the white frame house at the top of Munson's Hill.

As soon as they got inside the quarrel resumed, and Silas shoved Emma against the stove. This enraged May, who picked up a lamp and hurled it at Silas (the Washington Evening Star reported that May lunged at him with a kitchen knife). 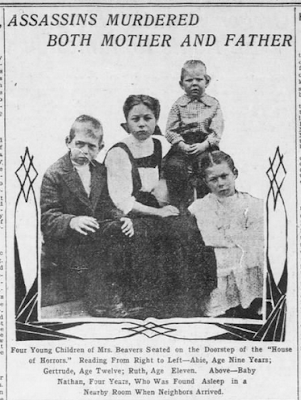 Whether May attacked Silas with a lamp or knife is irrelevant, however; all reports indicate that Silas responded by drawing his pistol and firing it at the girl, who managed to escape from the house unscathed. Emma also tried to flee from the house.

"Oh, no you don't!" yelled Silas, grabbing the housekeeper by the shirt, in the presence of her four startled children. "I'm going to kill you right here, right now."

Five shot followed, with the fatal bullet entering the back of Emma's head. She fell to the floor, and Silas was now suddenly stone cold sober. He stared down at his handiwork, the spreadening pool of crimson on the floor, and turned the gun on himself. It is unclear whatever became of the pistol, but if it is still out there in someone's antique firearm collection, it is a weapon with a bizarre and morbid pedigree; the brains of Nellie Putnam, Silas Putnam and Emma Beavers were all pierced by bullets fired from its barrel.

As for the Falls Church house of horrors, there are no records of it having been demolished, so the fate of that cursed dwelling remains unknown. Perhaps it is still standing, waiting to claim its next victim.