The Fiendish Revenge of Achilles Bertoni 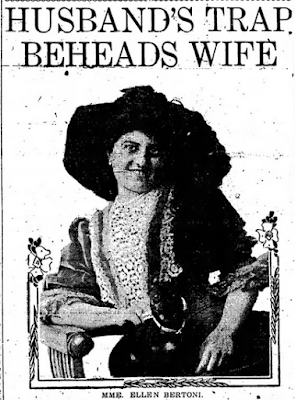 In November of 1907, a wealthy Italian banker exacted revenge against his cheating wife and her playboy lover in the most shocking manner. The true tale of Achilles Bertoni is proof that, when it comes to cruelty, the human mind knows no boundaries.

At the age of 52, Signor Achilles Bertoni was a self-made millionaire who had risen from humble origins to become the wealthiest man in Rome, if not all of Italy. Three years earlier, enjoying his newfound success as a leading figure in European finance, Bertoni had attended a concert at an opera house and fell instantly in love with a Sicilian singer by the name of Ellen Rotelli, whom the press touted as a great beauty (judging from Ellen's picture, however, it's probably safe to say that legends of her beauty had been greatly exaggerated). Bertoni's friends warned him about the object of his affection, however, as the singer had a bit of an unsavory reputation when it came to her, well let's just say... sexual proclivities.

Nonetheless, the banker and the opera singer were married in Palermo in May of 1904 and, much to everyone's surprise, seemed to present the image of the perfect couple. Ellen appeared to be a loyal wife and Achilles a devoted husband. In March of 1907, Bertoni's career threw him into the company of a 28-year-old Adolphus Zerbati, a rich playboy and sportsman blessed with a bronzed, muscular physique and the looks of Adonis. The banker's sister, Jenny, fell madly in love with Zerbati and he reciprocated; before long they were engaged, and Achilles Bertoni was looking forward to many decades of prosperity with his new business partner and future brother-in-law.

Unfortunately for the financier, Signora Ellen Bertoni also became enamored with the young playboy. To his credit Zerbati shunned Ellen's advances at first, but she persisted relentlessly until the day came when Zerbati succumbed to her flirtations. They began seeing a great deal of each other, and several times a week Zerbati would whisk Ellen away to his Albani villa in his convertible.

When Jenny Bertoni discovered this, she was understandably irate, but she bit her tongue so as not to risk destroying her brother's working relationship with Zerbati. She pressured Adolphus to move up the date of the wedding, in the hopes that marriage would cure him of his playboy ways. Zerbati, who was apparently in no rush to give up sowing his wild oats, kept hemming and hawing, finding excuse after excuse to postpone the wedding. Eventually Jenny could take it no more, and she went to the stock exchange in Rome and spilled the beans to her brother about Adolphus and Ellen. She even gave Signor Bertoni directions to his villa, and Bertoni was about to rush off  to Albani and strangle his business partner with his bare hands, but was then struck by an ingenious method of revenge.

Alongside the private road leading through a grove of trees near Zerbati's villa Bertoni spotted a steel wire attached to a wooden post, perhaps the remnant of a long-forgotten fence. After calculating the height of Zerbati's convertible, the banker stretched the cable across the road and fastened the other end to a tree. Later that afternoon the lovers left the villa, and Zerbati and his passenger got into the roadster and raced down the private driveway. They struck the wire at a high rate of speed, the steel separating their heads from their bodies like a guillotine. The automobile veered off the road, down an embankment, and overturned, tossing the mangled occupants into the woods.

Hours later the bodies were discovered by some passersby who then notified the authorities, but they were already aware of the gruesome crime; after exacting his revenge, Signor Bertoni casually strolled into the police station and turned himself in. Being the richest man in Rome had its perks, of course, and public opinion was so overwhelmingly in his favor (many Italians consider revenge to be an art form, after all) that he avoided any jail time.

As for Jenny Bertoni, however, she was so distraught by the tragedy that she withdrew from society and entered a convent.