The White Lady of Greenwich Street


Today, Greenwich Street looks like any other part of Manhattan's Financial District, but in the 18th century it earned a reputation as one of America's most fashionable neighborhoods. A mansion-lined thoroughfare running parallel to the Hudson River, Greenwich Street was home to the upper crust of New York society until the era of the Civil War, a time when many of the wealthy residents relocated uptown.

A 23-story landmark known as the Cunard Building has occupied a city block on Greenwich Street since its construction in 1921, when it was erected on the site of an old warehouse which once stood at No. 37 and No. 39 Greenwich Street, near the historic Bowling Green Park. Although the warehouse itself was not in any way or shape remarkable, it did earn a reputation in the early 20th century as one of the most haunted locations in New York City.

This warehouse was the haunting place of an apparition known as the White Lady of Greenwich Street-- a ghost that was said to have been responsible for at least two strange and inexplicable deaths.

Adjacent to the warehouse there once stood a magnificent mansion known as the Luman Reed Mansion, which bore the address of No. 13 Greenwich Street. Reed, a prosperous merchant who became one of the city's greatest art collectors, passed away at the age of 49 in June of 1836 after a sudden illness . Reed's exquisite mansion-- finished with Italian marble columns and glazed plate glass windows-- was put on the market and sold. The mansion passed through several hands until the Civil War, when it became the United States Hotel. By the 1870s, the Luman Reed Mansion had degenerated into a tenement, and was finally torn down in 1918 after falling into ruin.

It was another prosperous merchant who bought the mansion after the death of Luman Reed, but he scarcely had time to enjoy it. According to local legend, he was drowned in the South China Sea, leaving behind a young bride who dealt with her loss by hanging herself in the attic of the mansion.
One night in 1916 a clerk in the adjacent warehouse by the name of John Palmer, along with a night watchman named Tom Whalen, heard a blood-curdling shriek coming from the part of the warehouse that was nearest to the attic of the then-abandoned mansion. They promply investigated the chilling scream, and when the men entered the room from where the voice had emanated they saw the white-clad apparition of a young female vanish through a solid brick wall. Whalen collapsed from fright and never recovered; he died within two weeks.


After Whalen's death a new watchman was hired, and it wasn't long before he had his own encounter with the White Lady of Greenwich Street. One night he noticed a pale light glowing from one of the upstairs windows of the abandoned mansion. Suspecting thieves or vandals, he procured a ladder and put it against the wall of the old mansion and climbed up to peer into the window. But it was not a squatter or dope fiend he spied through the glass, but the shadowy form of a young woman sitting in front of a dust-laden walnut dresser combing her hair, gazing expressionlessly into the grime-covered mirror. The watchman was so shaken by what he had seen that he was removed to Bellevue's psychopathic ward, where he died three weeks later.

According to an article about the White Lady that appeared in the June 15, 1918 edition of the New York Evening World, there was another watchman, whose name is recorded only as McLaughlin, who claimed to have been pelted by stones thrown from a phantom hand whenever he entered a certain room of the warehouse. The stone-throwing eventually became so tiresome that he quit his job. Another watchman, whose name has been lost to history, claimed to have felt something brush against his face in the dark while making his rounds. When he turned on the lights, he was confounded to discover that there was a streak of green paint on his cheek. 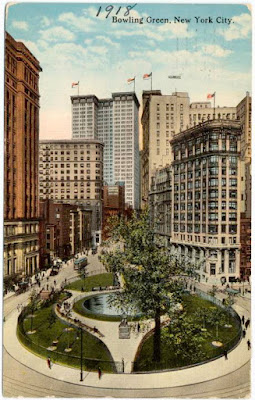 Although the warehouse was said to be haunted by the ghost of the White Lady of Greenwich Street, it seems to me that the warehouse was also visited by the spirit of the mansion's original inhabitant, Luman Reed. While not much is known about the young bride who hanged herself in the attic after her lover was lost at sea, it is known that Reed-- aside from being an early patron of the arts in NYC-- was also an avid landscape painter himself, and this would certainly account for the ghostly green paint. Luman Reed, coincidentally, was born in 1787 in a New York village called Green River, and his mansion was designed by an architect by the name of J. Green Pearson, and it stood at No. 13 Greenwich Street directly next to the historic park known as Bowling Green.