The Wild Man of Chilhowee 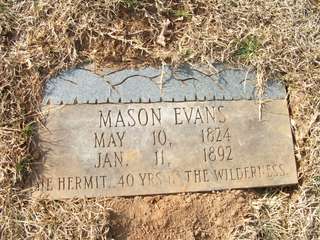 The following story is an excerpt from Hairy Men in Caves: True Stories of America's Most Colorful Hermits, by Marlin Bressi. Reprinted with author's permission.


The Great Smoky Mountains have been the home of many a hermit in Tennessee, but few of these wild men have attained the level of notoriety as Mason Evans, known throughout the Volunteer State as the "Wild Man of Chilhowee". When he died in the spring of 1892, word of his demise was printed in hundreds of newspapers across the nation. He is the rarest type of hermit; one whose name continues to live on, long after his body and bones have turned to dust.

The colorful life of Mason Kershaw Evans began in 1824 in Monroe County, on the land which the Cherokees had signed away to the United States government just a few years earlier. Though he was born into a modest Quaker family, Mason attained a fair amount of success in early life, first as a captain of the state militia and then as a brilliant school teacher. He eventually landed a position as the principal of a small school in McMinn County. Little did Mason know at the time that his future would be determined by a young teacher he would soon hire.

Mason became attracted to the beautiful young woman whom he had hired as a teacher. She was the daughter of a wealthy landowner, and the girl's stern father was one of the most powerful and influential men in the county. In order to prevent scandal, the pair met regularly in the shade of a large white oak, carrying on their romantic tryst away from the prying eyes of the pupils and villagers. The romance blossomed like a cherry tree in springtime, and before long, their conversations turned toward marriage.


As was the custom of the time, the bride-to-be went to her father for his permission and blessing. He was, to put it mildly, less than satisfied. Mason was just too common, her father tried to explain. The daughter of a retired doctor and wealthy landowner deserved more than a bookish school principal and part-time soldier, he explained. But the more the young woman professed her deep love for Mason, the angrier her father became. He did not support the government's plan to remove the Cherokee from their God-given territory, and he certainly would not allow his daughter to marry a militia man who would be duty-bound to slaughter innocent Cherokee women and children if the order was given.

The following morning, Mason saddled up his sleek black horse and raced to the school in order to await the appearance of his future bride. Mason was certain that the girl's father had given her permission to marry, and he was so exited that he found it difficult to focus on his duties as principal. The bell rang and children filed into the classroom, but still there was no sign of the young teacher.

Growing worried, he taught class as best he could. As soon as class was dismissed, however, he got back on his horse and raced like lightning to the farm owned by the teacher's wealthy father. Along the way he spotted a buggy owned by the wealthy landowner and, as the young schoolteacher climbed down from the carriage, Mason raced over with arms wide open. She refused his embrace and turned away and though she refused to explain her sudden change of heart, Mason knew by the iciness of her tone that it was over. Heartbroken, Mason returned to the home he shared with his parents, put his horse in the barn and, without speaking a word, disappeared into the mountains. He made his new home in Panther Cave, on Starr Mountain, where he would spend the better part of the last forty years of his life.

His hair grew long, his clothes disintegrated into rags, and he subsisted on nuts, berries and rattlesnake meat, which he consumed without cooking. After a few years of solitude Mason discovered that there was another hermit living on Starr Mountain. The rival hermits initially fought with each other, each believing that the other was an intruder in his kingdom. Finally, the two men reached an armistice and both occupied the mountain in peace. It was around this time when Mason witnessed something very strange.

The crackle of gunfire was nothing new to Mason; he had been chased by angry farmers during his midnight raids of their chicken coops and had encountered countless hunters traipsing through the forest. But he was startled to discover that the gunfire came from the rifles of gray-clad soldiers. Mason wondered if America had been invaded by a foreign enemy; for he had no way of knowing that Tennessee had seceded from the Union. For months Mason lived in a state of despair, fearing that he would be arrested for desertion and hanged as a traitor.

Not long after the war, construction began on a hotel which was being built on his beloved mountain. Known as the White Cliff Springs Hotel, this resort was touted as one of the most commodious in the Smoky Mountains, able to accommodate up to four hundred guests per night. The hermit was initially angered at this intrusion upon his private kingdom, of which he was de facto emperor. But as time went on, Mason convinced himself that it would be in his best interest to use the resort to his advantage. He wasn't getting any younger, and being a hermit was hard work, what with the need to hunt down every meal and scavenge for the vital necessities that would allow a hermit to survive season after season and year after year. Mason befriended the cooks who worked at the White Cliff, and these cooks would leave buckets of food for him outside hanging on tree limbs.

The hotel brought all kinds of new faces to the region, among them a Yankee who decided to start a newspaper in the sleepy county seat of Athens. The Yankee editor, who had a soft spot for sensationalism and a hard time selling newspapers, learned of the hermit and began to print numerous stories about him, many of which stretched the limits of credulity. The editor called for the capture of the "wild man", speculating that he was a deranged individual who posed a threat to the public's safety. Thanks to the Yankee's sensational stories and far-fetched fabrications, Mason Evans was hunted down, captured, and taken to the jail in Athens.

The deputies dragged the shaggy mountain man to jail in 1890, cuffed and shackled to prevent him from escaping. Once word spread that Mason was in Athens, hundreds of curious locals flocked to the jailhouse. The frightened hermit cowered in his cell, attempting to hide himself from the curious crowd which pointed their fingers in his direction and jeered. He managed to escape at some point during the night.

Knowing that it was too dangerous to return to Panther Cave, the hermit roamed the mountains for days until he decided to visit a brother-in-law named J. Horner Coltharp, who owned a large parcel of forested land. Coltharp built a shack for the hermit on this land so that he could live the rest of his days in peace. On January 11, 1892, Coltharp found the body of Mason Evans frozen to death on the side of Starr Mountain. His body was placed in a simple wooden casket and buried at Hickory Grove Cemetery, where a stone marker still bears the hermit's name and an inscription which reads: The Hermit, 40 Yrs in the Wilderness.
hermits Tennessee