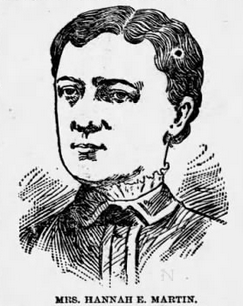 Throughout American history, many individuals have appointed themselves as religious prophets. In many cases, some of these self-styled messiahs even managed to amass legions of faithful disciples. While these now-forgotten cult leaders only live on as footnotes of history, their stories continue to captivate and entertain to this very day. One such forgotten messiah is Hannah E. Martin, who, at the end of the 19th century, led a bizarre sect of Christian zealots known as the Perfectionists.

In Spring Grove Cemetery, just outside the city of Cincinnati, dozens of cult members kept watch night and day over the mortal remains of their leader, Mrs. Hannah Martin, in May of 1895, waiting for her reanimated corpse to jump out of the grave. Hannah had told them often that she was immune from death, and her devoted followers-- comprising some of the most prominent and educated members of Cincinnati society-- could not be persuaded otherwise. 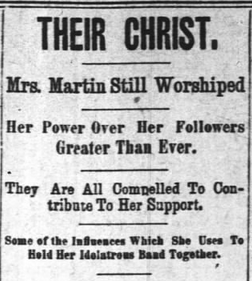 What was it about this strange woman-- the divorced wife of a wealthy restaurateur-- that her followers found so charismatic?

Hannah was a dissatisfied Ohio housewife when she decided to leave her husband, John B. Martin, and embark on the parth of cult leader after becoming convinced that she was the "female Christ". After her divorce was finalized, she, along with her sister, Mrs. J.C. Brooks, devoted all her time to developing the doctrines that would serve as the foundation for a group of religious fanatics who became known throughout Ohio as the "Perfectionists".

The base of operations for the cult was Walnut Hills, one of the city's most fashionable suburbs at the time, where the Perfectionists met for twelve years in high secrecy. Although it was rumored that Hannah Martin ran her sect with a cruel iron fist, outsiders knew very little of the cult's practices until after her death, when an intrepid reporter from the Cincinnati Herald gained access to the cult, describing it "as sacrilegious a band of fanatics as the world has ever seen."

The Perfectionists were formed in 1883, a small offshoot of a group of 25 or so local Methodist residents who met every week for Bible study in Walnut Hills. Initially, there was nothing strange about their beliefs; they believed in God the Father and Christ the Son. Soon, however, they begin to yearn for a leader who could take charge of their weekly gatherings and it eventually fell upon a quiet, unassuming housewife, Mrs. Martin, to arrange their studies. 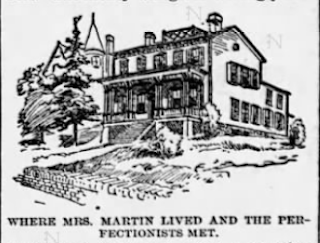 At the time, Hannah entertained no thoughts of the influence that she would soon come to wield, and she humbly, if not reluctantly, assumed the leadership position. But after a time-- at first, almost imperceptibly-- a change came over the Bible study group. As Hannah became more comfortable in her role, new members joined the congregation. Their admiration and respect undeniably filled a need for attention that had been lacking in Hannah's life, thanks to her cold loveless marriage, and Hannah thrived on the way that her small group of followers hung on her every word.

Not long afterward, she began to tell her followers about hearing voices and seeing visions. She claimed to be able to converse with angels, and then one day she made the startling announcements that she had been "divinely commissioned" as God's representative of earth. Remarkably, no one in her Walnut Hills congregation batted an eye. From that point, it was only a matter of time before Hannah claimed mystical, godlike attributes for herself, which her followers accepted blindly and without protest. Soon Hannah began to claim that she was not Christ, but God (by this time, her older sister had been "promoted" to the title of Female Christ). 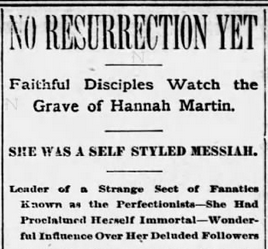 Since Hannah's teachings were deemed blasphemous by the Methodists, it wasn't long before she and her group were brought to trial before the church. On a Friday night in June of 1887, a secret session was held that the Walnut Hill Methodist Episcopal Church. Thirty-five members of the Perfectionists were arraigned before a church committee and charged with four "crimes" against the faith:

First, and foremost, was the teaching that Mrs. Hannah Martin was God and that Mrs. J.C. Brooks was Christ. Second, was the Perfectionist belief that Jesus of Nazareth was the biological son of Joseph (thereby refuting the concept of Immaculate Conception). Third, the Perfectionist teaching that the current established church was the "Whore of Babylon" alluded to in the Book of Revelation. The fourth crime against the church of which the Perfectionists were charged was their belief that Hannah Martin possessed the ability to work miracles.

Martin and Brooks were tried separately and, after listening to hours of testimony, Rev. Dr. Peame decreed that the two women should be expelled from the church. Peame went on the state that Mrs. Martin's actions were "simply disgraceful, and ought not to be permitted in any respectable or civilized community."

According to historical records, members of the sect were forbidden to refer to Hannah Martin by her legal name, either in or out of her presence. When speaking of their leader, the Perfectionists were to use only the word "She", and before long the sect began practicing elaborate and ornate rituals, which Hannah had stitched together from theosophy, Buddhism, Shintoism and Christianity.

One of the basic rules of the sect, the First Commandment, was that none of the members could keep anything of his or her private life secret from their leader. Why such an omniscient being like Hannah shouldn't already know these things was a basic question none of her followers ever bothered to ask, but it was one of the many absurdities that "She" demanded from her disciples. Each member was required to recite their daily thoughts and actions for Hannah's sole amusement. In addition, they were required to report to "She" their salaries and earnings, and to inform their leader whenever they engaged in sexual intercourse with their spouses. Nothing was too private or sacred to keep from the all-absorbing ears of "She".

As is the case with most world religions, eternal life was at the heart of Martin's teachings, which held that there was no such thing as physical death. Whenever a member of the Perfectionists passed away, Hannah was quick to point out that it was due to the lack of faith on the part of the deceased. If only they had been more faithful, they could have gone on living forever.

Things took a strange turn a few years later when Hannah decreed that the Bible itself was sacrilegious and blasphemous to the sacred doctrine "She" had invented. The Bible was promptly banished from the circle. Hannah then banned sex in general, declaring that child bearing was a crime. Nonetheless, members of the sect gave their money to Hannah Martin freely, never asking as to how it was to be used.

One letter, penned by Martin's former Sunday school teacher, was published by a local paper after the cult leader's death, and paints an interesting picture of the cult leader:

The Mrs. Martin spoken of was for two years one of my Sunday school girls. Her name was then Supplee. An older sister married J.C. Brooks. They were all prominent Methodists. They first went off into the holiness cause and soon became very enthusiastic, or as some said crazy. Mrs. Martin forgave the sins of her followers at the rate of two dollars and a half a week. Before she died she claimed her spirit would return to her body in three days, but it didn't do it; so she was buried, but her people are still watching. I may add that not all of my Sunday school girls turned out as big fools as Miss Supplee and her sister.