The Underwater Shrine of Lake Michigan 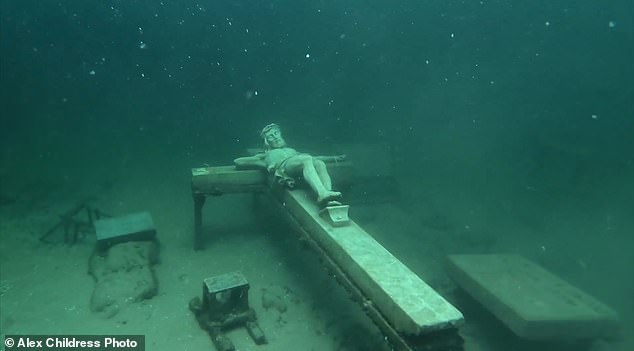 In the tiny town of Petoskey in northern Michigan, over one thousand curiosity seekers gathered along the shoreline of Lake Michigan last weekend to catch a rare glimpse of a marble statue of Jesus on the cross submerged beneath the icy water.

For many people around Little Traverse Bay, this is an annual ritual-- a pilgrimage to the site of an 11-foot, one ton crucifix which was placed under water decades ago by a heartbroken diver to mourn the loss of a drowned colleague, and which has come to serve as an underwater memorial dedicated to those who have lost loved ones from drowning, shipwrecks and boating accidents.

According to local sources, the creation of the marble statue was commissioned by the family of a teenage boy who lost his life in a farming accident in 1956. The family, however, was unhappy with the results and demanded a new statue. The unwanted statue was later purchased by a member of a diving club, who had it placed 22 feet below the surface of Lake Michigan in remembrance of a drowned friend.

Every year since 1986. a public viewing of the statue has been held at Little Traverse Bay. However, weather conditions have prevented the annual viewing every year since 2015.

For more pictures and videos of this year's viewing, click here.