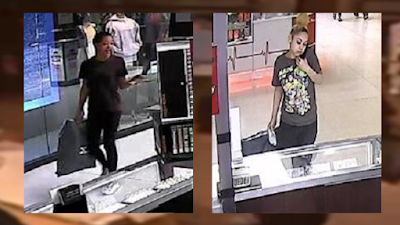 On Sunday, April 7, the Victoria's Secret store at the Capital City Mall in Camp Hill, Pennsylvania, became the scene of what is perhaps the greatest panty raid in history, when two female thieves ran off with over two thousand pairs of underwear.

According to the Lower Allen Township Police Department, the value of the pilfered panties is believed to be around $21,000.

The theft occurred at approximately 3 p.m. and store employees discovered a short time later that the notorious knicker nabbers had managed to steal all of the merchandise from the store's front window display, as well as every single pair of panties located in the drawers beneath the front display.

Apparently, attentiveness is not a prerequisite for employment at Victoria's Secret.

However, while the knicker nabbers managed to escape the notice of oblivious employees, surveillance cameras managed to capture the incident, and on Wednesday police released two photos of the suspects to local media outlets. The first suspect is a black female wearing a black t-shirt, black pants and white sneakers. The other suspect is Hispanic, wearing a black t-shirt with graphic on the front, black pants and sneakers. Anyone with information about the theft is encouraged to call the Cumberland County Crime Stoppers at 855-628-8477.