The Death Crown of Feathers 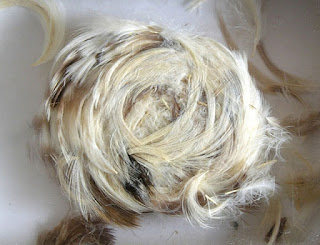 "A crown of feathers is in the pillow of every sincere Christian at the time of death". This, for many centuries, was a popular saying in Appalachia based on the age-old belief that true Christians leave behind a tell-tell sign of their salvation after they are called to the hereafter-- in the form of a mysterious crown of interwoven feathers that inexplicably appear inside the pillow of the deceased.

While this strange and morbid saying is seldom heard today, there's a good chance that there are still some senior citizens who, as children, may have heard about this legend from their parents and great-grandparents, and history records several bizarre accounts of "crowns of feathers" which have mysteriously appeared inside the pillows of the faithful departed.

One such case occurred in Princeton, Missouri, in the spring of 1914 after the death of a deeply-religious woman named Mrs. Isaac T. Holmes. As was the custom at the time, relatives examined the contents of the dead woman's pillow for a supernatural sign that would provide reassurance of Mrs. Holmes' salvation. A dozen mourners gathered around the woman's deathbed, ripped open the pillow, and found such a crown of feathers, directly under the spot where her head had rested at the moment of her death. According to newspaper reports, the "close and compact weaving of the crown indicates that it is not the work of human hands".

Upon hearing the news, the pastor of the Princeton Methodist Church, Rev. O.J. Wilson, made a meticulous examination of the strange object, before expressing his opinion that it was a sign to believers, adding that it was the first time (at least to his knowledge) that such a crown was discovered in the United States. According to reports, the mysterious relic was three inches in diameter, closely-woven and solid and compact, much like the top of a straw hat. Joseph Holmes, a son of the deceased, placed the crown of feathers in a glass case, where it was observed with awe by virtually every resident of Princeton.

"I must confess that when it was first told to me that this crown of feathers had been found in the pillow of a certain person I entertained a feeling of doubt, the same as anyone does who has not seen it... Perhaps some one had made this and put it into the pillow in order that it may be found after death. Or, perhaps, the feathers had come into this accidental formation under the restless motion of the head.

"The next day, I called at the home where the lady lay a corpse. I saw with my eyes and handled with my hands a little crown of feathers not over three inches in diameter. By a crown I do not mean that sort that is worn by kings, but a formation similar to the crown of the head or a hat. The feathers all weave in one direction, the quills pointing into the center and no quill exposed to sight. It is exactly alike on both sides, being about three quarters of an inch in thickness. I assure you that I examined it most closely and have thought much about it since. Not for a long time have I observed a phenomenon that has so dumbfounded me as has this."

Rev. Wilson, however, was incorrect when he declared that Mrs. Holmes' "death crown of feathers" was the first ever found in this country. In fact, it wasn't even the first found in Missouri. In 1899, a 16-year-old boy from Joplin passed away after a short illness. In order to assauge his grief, the boy's father instructed his daughter to tear apart the pillow in the hope of finding a feather crown. To the grief-stricken father's surprise, his daughter found not one, but seven, crowns inside her dead brother's pillow. On Dec. 1, 1899, the Daily Arkansas Gazette reported:

One of them was exhibited at the Soliphone office today by Mayor Thompson. The crown is a large one, and is beautifully and perfectly constructed, as if woven by the hand of an artist.

Since that time, there have been a handful of similar cases throughout the country. A letter appearing in the May 4, 1973, edition of the Post-Herald of Beckley, West Virginia, from a Mrs. Sherman McDaniel, suggests that these miraculous crowns can form even in the pillows of the living. Mrs. McDaniel wrote:

"My mother was seriously ill in 1933. Someone found the crown of feathers while rearranging her pillow to make her more comfortartable. She recovered from her illness and lived 15 more years. She died in 1948. She was Virgie Maynard Runyon, wife of the Rev. Ernest D. Runyon, a Baptist minister of Pike County, Kentucky."

Shirley Donnelly, a reporter for the Post-Herald, wrote of several other "death crowns of feathers", such as the one that was found inside the pillow of a widow by the name of Belinda Blake, who was the daughter of William Duncan, a pioneer settler of Oak Hill, West Virginia.

At around 11 o'clock on the night of Saturday, March 6, 1920, Belinda's husband, a storekeeper named Ashley Blake, was brutally murdered by 'Mote' Proffit, inside of Blake's store on what was then called the "old Minden road". After a night of drinking with his brothers, Mote attacked Blake and cut off his head with a hatchet. Blake's daughter, Runa, rushed to her father's rescue, but Mote sunk his hatchet into the young woman's back (in spite of the brutality of these crimes, Proffit only spent a few years in prison and was released at the age of 31). As for the widow, she passed away inside her Oak Hill home on Dec. 15, 1933, at the age of 72. A perfectly formed crown of feathers was discovered inside her pillow when relatives straightened Belinda's death bed.

So why do we seldom hear about these bizarre death crowns today, and why have we stopped looking for them inside the pillows of our deceased loved ones? The answer, most likely, is that feather pillows have declined in popularity since the 1940s, when manufacturers began stuffing pillows with cheaper synthetic materials. And, sadly, with the decline of the feather pillow came the end of one of America's strangest death legends.