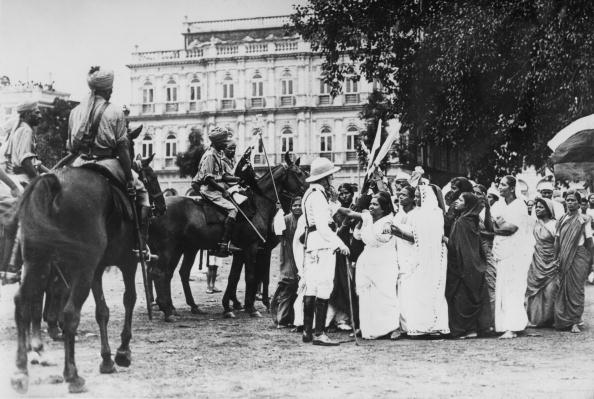 Can spirits exact revenge on their enemies from beyond the grave? The following true story was first published in 1901, and was written by a soldier by the name of C.B. Lewis, who was stationed in Gorakhpur, India, during the mid-19th century, at the time of British rule, otherwise known as the British Raj Era. The era of British Raj in India, which lasted from 1858 to 1947, was marked by unspeakable cruelty, pestilence, famine and death. Historians estimate that over 55 million Indians died from famine during the British Raj era.


The garrison of Goruckpoor in the province of Ondh, India, in the year 1862 consisted of 4,000 men and about half of these were split up into small detachments and stationed here and there in the north to keep order among the hill men and punish raiding dacoits. Dacoits are bands of robbers under command of a chief who holds a religious influence over them, and they are yet the pests of India along the foothills of the Himalayas. They are daring men and hard fighters, and very few British soldiers who fall into their hands are spared.

We of the Fourth, comprising 80 men, were stationed during the year 1862 almost as far north as the borders of Nepal. We had plenty of skirmishing with the dacoits for a time, but finally dealt them such heavy blows that they drew off and left us what seemed to be peace when the government dispatched a large train of treasure and military supplies from Goruckpoor for Ghoorka.

Colonel Kemble, who had been ordered to take command of the garrison at the latter place, was with the train and the whole was escorted by 250 cavalrymen. The route for the train brought it past our station, where it rested for a day and then moved on. In a defile 15 miles to the north of us it was ambushed by over a thousand dacoits and suffered a severe misfortune. There was not only a heavy loss in killed and wounded, but the treasure and a portion of the supplies were captured.

The remnant of the train returned to us and went into camp until reinforcements could come up, and Colonel Kemble, whose obstinacy and recklessness had brought about the disaster, proceeded to make it red-hot for everybody. Any set of men except British soldiers would have mutinied and taken his life.

Raging over his defeat and feeling helpless, he ordered out detachments and commanded them to bring in every native they could overhaul. It was a well-populated country, with hundreds of loyal natives, but the colonel proceeded to look upon each and every one as guilty of having had a hand in the attack on the train. More than a score were shot or hung offhand, while others were whipped at the post or ordered out of the district. It was a reign of terror for three weeks, and the end was a fitting one.

One day my own attachment brought in a mere boy whom we had found cowering in a thicket. I do not believe he had the slightest knowledge of the ambush or took part in it. He was a timid lad, whose father had been one of the first hung, and he was so frightened that but little could be got out of him. The colonel bulldozed and browbeat him and finally ordered his execution on the ground that he was a spy. It was only when he knew he must die that he braced up and showed his courage, and as he was being led away to execution, he said to the colonel:

"Sahib, colonel, I am innocent, and you will be punished for my death. You may shoot me and bury my body, but my spirit will follow you to the grave."

Half an hour later he was dead, but he was the last one to be executed. That evening, as the colonel entered the officer's mess tent for supper all of us noticed that he had a queer, troubled look on his face and that he cast furtive glances behind him. He tried to be jocular, but the effort was a failure. He said something about not feeling well, but nobody dared question him. At midnight we got an explanation. The colonel called the sentinel into his tent and with white face and trembling voice and the perspiration standing out on his forehead, he said:

"Do you see the boy sitting on the chest?"

"I see nobody, sir," replied the sentinel.

"He is there, I tell you! He followed me to mess and back, and he has been in plain sight all evening. Take him away!"

"But there's nobody here, sir."

And there wasn't. The sentinel called in two officers, who looked and searched in vain and assured Colonel Kemble that no boy was present. He tried to turn it off with a laugh but in less than twenty-four hours every man in camp knew that the colonel was haunted by a specter. He made a brave effort to bluff it out, but it was useless. The specter followed at his heels by day and sat by his bedside at night, and in a week the strong, aggressive man turned to us for pity and sympathy, but we had little to give. He had been brutal in his vengeance. 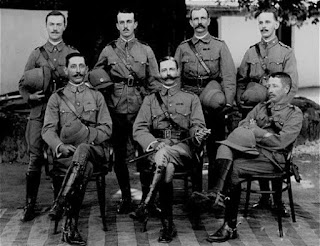 The surgeon looked up in the case at first as some disorder of the brain, but later acknowledged that it was something beyond medicine. No one else could see the specter. The colonel would say that it was beside him or stood in the door but there was nothing for other eyes to rest upon. He would draw his sword and thrust at the specter, but he could not harm it.

By the surgeon's advice the colonel returned to Goruckpoor. It was reported as a case of breaking down over mental anxiety, but hundreds of people came to know better. The specter followed him back, followed him to the house of a friend, sat with him through every hour of the day. He made the gamest sort of fight, knowing that his career was at stake, and at length all men came to pity him-- and avoid him as one accursed. He was medically treated, given brief furloughs, and every effort was made to build him up, but at the end of eight months, every day and every night of which had been a terror to him, he ended by blowing out his brains.

Was it a case of a man haunted by a spirit seeking revenge? It was not so reported officially, but from first to last and from the highest to the lowest, and this included two surgeons, it was firmly believed that it was, and the uncanny affair had a great influence over other officers and their treatment of the natives.
British Raj ghost stories India