The Boys Who Lived in a Barbed Wire Cage 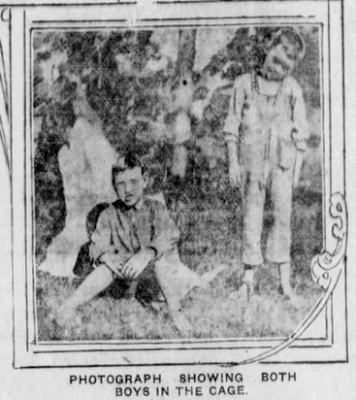 All of the recent political talk about the migrant crisis at the U.S./Mexico border and the alleged caging of immigrant children at ICE detention facilities brings to mind the strange case of Charles and Clarence Legare, whom the government condemned to a life inside of an outdoors barbed wire cage in 1906 after an alleged paranormal encounter that transformed the once mild-mannered boys into stark, raving mad lunatics.

At the ages of nine and seven, Clarence and Charles Legare appeared to be two perfectly normal and healthy boys. And like most boys who lived in the city of Baltimore at the time, Clarence and Charles entertained themselves by exploring spooky and forbidden places. One such place existed just a few blocks from their own home.

Known locally as the Baldwin House, this deserted mansion on 28th Street was rumored to be haunted. Neighbors often reported hearing ghastly noises inside and seeing mysterious lights flickering behind the dusty windows. One particularly strange account from the era describes a deformed, freak-like creature that was regularly seen sitting at an upstairs window.

The Legare boys, along with a handful of other neighborhood children, were determined to sneak inside the old building and have a look around. One afternoon they pushed their way inside, only to rush out a few moments later. The San Francisco Examiner gave the following description of the incident:

A few moments later when the children rushed out of the house with a wild, terrified look, they were dumb, so far as appreciating what was said to them. A strange, uncanny expression, like that seen in idiots and crazed people, was in their eyes and they made odd, guttural sounds, although neither could utter a word.

Terrified at their appearance, the lads who had been playing with them ran away, leaving the youngsters to get to their home as best they could. And when they toddled into the kitchen of the modest little home occupied by the Legares, their mother almost fainted. 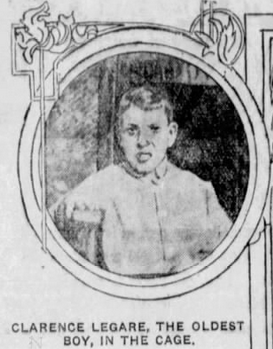 Doctors who examined Charles and Clarence were baffled; the only explanation they could give was that the children had seen something inside the house that scared the wits out of them. For weeks the mother carried her boys to institution to institution, imploring physicians to find a cure for their bizarre malady, but to no avail.

At home, the once mild-mannered boys became an unholy terror. Charles broke and smashed everything he could get his hands on, while Clarence ran away at every possible opportunity, determined to return to the Baldwin mansion. Fearing for their safety, Mr. and Mrs. Legare sold their home and purchased a cottage on Merryman Lane, just down the street from Johns Hopkins University.

At the behest of local authorities and public health officials, the Legares were instructed to surround their property with barbed wire to prevent the unruly children from escaping. This worked for a little while, until the boys figured out they could escape by burrowing under the fence. For some inexplicable reason, Charles and Clarence were being summoned back to the haunted house on 28th Street. To remedy this situation, authorities shackled heavy steel balls and to their ankles, while the boy's parents constructed a barbed wire cage in the backyard to serve as their permanent living quarters.

Charles, the younger of the boys, was described as being "the more vicious of the two", and soon developed a habit of hurling rocks, bottles and other objects at those who passed by the Legare home. The San Francisco Examiner stated:

He will climb to the top of the cage and pull his shirt and trousers to rags, using the barbed wire prongs to tear his clothing and unmindful when the blood streams from his little legs. The, when his passion has subsided, he will come back to the earth bottom of the cage and play with his idiot brother, seemingly forgetful of the harm he has accomplished and the sores and scratches he has put all over his little body.

The matter was turned over to the Baltimore Society for the Prevention of Cruelty to Children, who declared that nothing more could be done. No local sanitariums had adequate facilities to hold them, and local laws forbade the police from allowing the boys to live inside a jail cell. But as summer gave way to fall and the weather turned colder, the parents grew worried. The boys were too maniacal, violent and destructive to be allowed back inside the house. 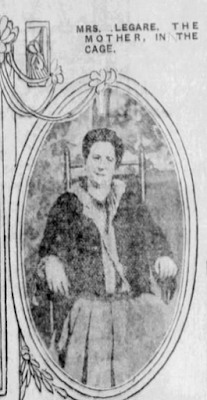 While the medical experts scoffed at the idea of witchcraft or demonic possession, this was the only explanation that made sense to Mrs. Legare, who told the Examiner:

"They were as healthy as I am, and after they came home from that house on Twenty-eighth street they were like this. People always said the house was haunted and I never believed it, but at nights now when I sit in my room and look over the hills and note its location-- when the moans from one of the boys comes to me-- I know I believe in the witchcraft of the house, and then, for a moment, nothing can dissuade me that the house is possessed of evil spirits and ghosts."

But what was the real reason behind the strange behavior of Charles and Clarence Legare?

In November of 1907, Martha Legare was granted a divorce from her husband, Charles, and awarded custody of their four children after claiming abuse and mistreatment. Charles, incidentally, happened to work as a painter. Since many paints of the era were made with lead, arsenic and other toxic ingredients, the most likely explanation is that the Legare children suffered from a condition called encephalopathy as a result of exposure to toxic paint. Symptoms of lead and arsenic poisoning include violent outbursts, loss of cognitive function, delirium, and memory loss-- all symptoms that were displayed by the two Legare children.

But how and why did they develop these symptoms so suddenly while inside a haunted house?

Although it is extremely rare, acute lead and arsenic poisoning can produce immediate swelling of the brain. And there would be no shortage of toxic metals inside the supposedly haunted Baldwin house-- arsenic could be found in everything from wallpaper to furniture upholstery in those days.
Fortunately, many of these symptoms can go away after a while, and that appears to be exactly what happened. In 1909, Martha Legare married a man by the name of Kolbe and moved away to Towson, and the strange story of her "demonically possessed" children appears to have ended at that point.