The Gruesome Legend of a Romanian Cathedral 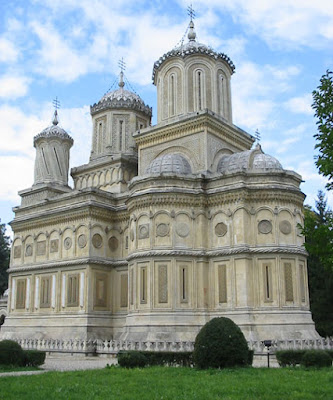 Built in 1517, the Curtes de Arges Cathedral in Romania is one of the most fabled historic sites in the Carpathian region once known as Wallachia. While the imposing limestone structure, which has the appearance of an enormous mausoleum, has inspired poets and artists for centuries, it is the gruesome legend of the cathedral's construction which has captured the imagination of Romanians ever since the rule of a prince by the name of Neagoe Basarab.

Basarab ruled Wallachia from 1512 to 1521, at a time when the region, though independent, was a protectorate of the Ottoman Empire. Or, to put it more accurately, the Ottomans promised not to ransack and invade Wallachia unless the ruling princes paid them vast sums of money.

Basarab was of the Craiovesti-- the royal family which had ruled the region for over a century and had produced several princes. As was so often the case in Romania, many of these princes turned out to be cruel, blood-thirsty tyrants with a fondness for torturing peasants. Basarab, in an attempt to atone for the cruelty of his ancestors (and to perhaps curry favor with the Roman Catholic and Eastern Orthodox churches) spend much of his reign constructing churches, monasteries and cathedrals.

For Neagoe Basarab, this was a smart decision. Many of his ancestors had met violent and untimely deaths, and Basarab had no intention of being the last of the Craiovesti. He also realized that in order to keep the Ottomans at bay, the Christian church would have to be united as one. As a result, he not only built scores of Eastern Orthodox churches in Wallachia, but across the Balkans.

One of the many churches constructed during the reign of Neagoe Basarab was the Curtea de Arges Cathedral, and the architect he ordered to built it was a man by the name of Mesterul Manole-- a man whose tragic fate has turned him into a folkloric figure throughout Romania.

According to legend, after Basarab ordered Manole to draw up the plans, a large number of laborers were hired. But things did not go smoothly; there seemed to be some magic spell hanging over the work, and the construction was besieged by setback after setback. Each morning the men would come to work, only to find the walls they had erected the previous day had toppled. Nothing at all seemed to be going according to plan, and this greatly angered the prince.

Basarab cursed all of the laborers, calling them a pack of lazy dogs, and issued a severe ultimatum: If the walls had not been erected after one more month, the entire lot of laborers would be executed. This terrified Manole and his workers, but, try as they might, they could not seem to erect one wall without having one of previously erected walls crumble and fall.

As the legend goes, one night shortly after the prince had issued his warning, a mysterious figure in a white robe appeared to Manole in a dream, and told the architect that the church would never be completed, except on one chilling condition. The mysterious figure told Manole that a human sacrifice must be made. The first woman who entered the camp, no matter who it was, must be buried alive in the walls.

The following morning Manole told his men about his strange vision, and before long a woman was seen in the distance walking toward the camp. The men nervously held their breaths as she drew nearer, and then Manole let out a gasp. It was his wife, who had come to cook breakfast for the workers.

Manole ordered his men back to work, instructing them to leave one segment of the wall hollow. After breakfast, Manole tricked his wife into standing in the hollow. "Just to see what it would feel like to be buried alive," he joked. She laughingly obliged. But when the stones had reached the height of her chin Manole lost his nerve and begged his men to take her out of the wall. The men, however, fearing Basarab's ultimatum, continued to heap on the stones until Manole's wife was completely entombed.

The sacrifice was successful, and the church was completed without any further delays. Basarab came to inspect the structure and was very pleased with the result, but he wanted to be certain that Manole had given his best effort. "If you had to do it over again, would you build it exactly the same way?" asked the prince. Manole thought of his wife, and simply replied, "No."

This angered Basarab, who took the architect's response to mean that he had not designed the finest church in his power. He ordered Manole to ascend the scaffolding to the roof and stand next to the cross, so that he could get a better idea of its size. Manole obliged, but was horrified when he heard the evil prince instruct the workers to take the scaffolding away. Manole jumped from the roof, falling to his own death, and according to legend, a spring of clear fresh water sprung up on the very spot he died.

There are many variations of this legend; in some accounts, the prince was so pleased with Manole's work that he left him to perish on the roof so that he could never construct a better church for another prince.

But is there any truth to the legend of the Curtes de Arges Cathedral? While Neagoe Basarab did indeed order a number of churches built during his reign, history remembers him as a fair and competent ruler as well as a devout Christian. After his death in 1521, his wife, Milica Despina, entered a convent and became a nun. Their son, Teodosie, became ruler of Wallachia for a brief time, but was driven from the throne and died in exile in Istanbul. In 2008, Neagoe Basarab was canonized as a saint by the Romanian Orthodox Church.

As for the fabled church, major renovations took place in 1681 and 1804, and an entire reconstruction took place between 1875 and 1885. There are, however, no accounts of a woman's skeleton being found within its walls.