The Stone-Throwing Ghost of Wetzel County 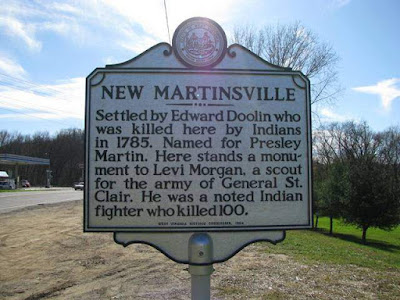 Situated along the Ohio River in northwestern West Virginia, rural Wetzel County is home to just fifteen thousand souls. It's county seat, and largest city, is New Martinsville, which boasts five thousand residents. However, back in the time of Henry Nolan, the population of the newly-settled village of New Martinsville was scarcely three hundred.

As one might expect, a man's word was his bond back in those days and in order to survive and keep peace with the neighbors, farmers like Henry Nolan had to be men of reputation-- loyal, practical, hard-working, God-fearing and, above all, honest. That's why the story of the Nolan family and their strange encounter with a rock-hurling poltergeist is remarkable. Such hard-to-believe stories have a way of tarnishing a folk's reputation. And, back in 1873, Henry Nolan had a great deal to lose by telling such a story; he was the wealthiest and most respectable person in Wetzel County.

Henry lived near New Martinsville, on the banks of Fishing Creek, with his thirteen-year-old son, John. John was a bright, intelligent boy, and known to be every bit as honest and respectable as his father. But in the spring of 1873, something happened that made Mr. and Mrs. Nolan wonder if their son had lost his mind. John claimed that, for several weeks, everywhere he went he was accompanied by a phantom, in the form of an old, gray-haired man.

John could see the old man plainly, but no one else could. This led his parent's to believe that John was on the brink of nervous exhaustion and, as a result, he was sent to live for several weeks with family friends. These friends, having been convinced that John's mind and health were fully restored, sent him back home.

John's absence seemed to have upset the ghost, as an article published by the Wayne County Herald on Sept. 3, 1874, relates: 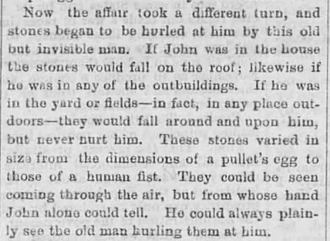 Things went on this way for quite some time, and the boy's mental and physical health began to decline until July, when his parents decided to send him away once again. Once more his health improved and he was returned home. On Saturday, July 28, John returned to New Martinsville, and some of the less-than-superstitious neighbors were determined to keep an eye on the boy, whom they had come to regard as a prankster and liar.

Early on Sunday morning, before John woke up, four men armed with rifles surrounded the Nolan home and took their positions, determined to ferret out and expose the alleged ghost. Scarcely had the boy arisen when a shower of stones began to fall on the roof of the Nolan home. The observers watched the stones fall like rain, but from where they came, or by what power, mystified the onlookers.

After breakfast John stepped out of the house, and the stones continued to fall. John pointed out the gray-haired phantom sitting in a briar patch in a nearby field, and the armed men raced to the spot, only to find it empty. The search went on all Sunday and into Monday, when the posse finally encountered the apparition. According to witnesses, the old man was dressed in blue trousers and an expensive shirt. Although he was hatless, the man's long snowy hair and beard hung in profusion over his shoulders. His face was deathly pale but the eyes of the ghost were clear and sharp-- and black as night.

The posse of mystified farmers, armed with clubs and rifles, advanced toward the apparition, but the old man vanished, leaving nothing behind but another inexplicable shower of stones and pebbles. When the ghost finally reappeared, someone in the group decided to shoot. Others followed suit, but the ghost was unphased by the volley. Neighbors spent two more days hunting the ghost, to no avail, while the boy's health once more began to rapidly deteriorate.

Unfortunately, it is unclear whatever happened to John Nolan, and whether or not he recovered. As to the identity of the entity which showered stones upon the Nolan home in the spring and summer of 1873, that, too, remains a mystery.