Paranormal Science: Does a certain protein allow you see ghosts? 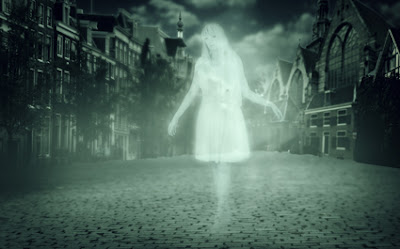 Having studied the paranormal for, well, pretty much an entire lifetime, I've often entertained some pretty unconventional ideas and wild theories about the science of ghosts, and have sought answers to many questions that have long haunted (no pun intended) the paranormal research community.

For instance: Why are ghosts seen more frequently at night than in the daytime? Why do ghosts appear to some people and not to others? Why are some people magnets for supernatural phenomena and others aren't? Why can some animals detect the presence of ghosts better than humans?

Over the years there have been numerous theories in regards to these questions, and now I'd like to propose one more: The ability to see ghosts may depend on the amount of a certain receptor protein and biological pigment called rhodopsin.

As chart below illustrates, lower frequency means longer wavelength. This includes radio waves and microwaves. Conversely, shorter wavelengths produce higher frequencies. This includes x-rays and gamma rays. High frequencies are, by nature, far more dangerous than low frequencies because they contain a greater amount of energy (this is why gamma rays can kill you, x-rays can make you sick, but radio waves are perfectly harmless).

Since every frequency possible falls somewhere on this scale, it's a pretty big scale. Everything you can see with your own eyes is called the visible spectrum, and this occupies just a tiny portion of the overall electromagnetic spectrum.  The human eye can detect wavelengths from about 390 to 700 nanometres. This allows us to see red (a wavelength of 620-700 nanometres) but not infrared (700-1050 nm), and it allows us to see violet (380-400 nm) but not ultraviolet (100-380 nm). Birds and bees can see ultraviolet light; turtles and some other reptiles can actually see infrared light.

Of course, each individual eye is different. For instance, some people might be able to detect wavelengths of 618 or 619 nanometres, which is not quite red and not quite infrared. Others might be able to detect wavelengths of 379 nanometres, which is somewhere in the twilight zone between violet and ultraviolet (the wavelengths mentioned are just approximations and are not set in stone). In other words, Bob's visible spectrum might be wider than Susan's visible spectrum-- and this may explain why Bob can see ghosts but Susan can't.

Now, this isn't earth-shattering news. Since the dawn of psychical research there have been people who have offered the same explanation. Ghosts have only been studied scientifically since the 19th century, while the spectrum has been studied since the 17th century.

However, it wasn't until much more recent times when scientists figured out why we can see the colors that we can see. Up until 1967, the biological process of "visual phototransduction" was a mystery. In this process, light is converted by photosensitive cells in the eyes into electrical impulses. This cannot be accomplished without a protein called opsin, which is found in the rods and cones of the eyes. There are three types of cone cells, which correspond to different wavelengths-- the L-cones detect long wavelengths (red), the M-cones detect medium wavelengths (green), and the S-cones detect short wavelengths (blue). Without these cones you would still be able to see, you just wouldn't be able to see in color.

When it comes to seeing ghosts, however, I believe that it is not the cones, but the rods, that are responsible.

Rod cells are photoreceptor cells in the retina that come into play in low light situations. Your rod cells are what enable you to see at night, and because rod cells are concentrated on the outer edge of the retina, they are used in peripheral vision. This is why we tend to see ghosts "out of the corner of our eye". And the reason why it's hard to distinguish colors at night is because it is the primary duty of the cone cells to perform this task. This also explains why ghosts are, for the most part, colorless-- because they are detected by the rods, not the cones.

But why, then, doesn't everybody have the ability to see ghosts?

This is where rhodopsin comes into play. Rhodopsin is a photo-sensitive protein that is only found in rod cells. It is also a biological pigment, much like the melanin that gives color to our hair and skin. Another name for rhodopsin is "visual purple", because it readily absorbs green-blue light, thereby making it appear reddish-purple.

This suggests that ghosts have a definite frequency and wavelength on the electromagnetic spectrum which lies just beyond the visible spectrum, somewhere between near-ultraviolet (300-400 nm) and ultraviolet-C (100-280 nm).

Not only does this theory explain why some people see ghosts when others can't, why ghosts are often seen peripherally, and why ghosts are more easily seen at night, but it also answer another age-old question pertaining to apparitions: Why do ghosts always seem to suddenly disappear?

The answer is that they don't disappear at all-- the eyes just stop seeing them.

Rod cells are super-sensitive; they can respond to a single photon of light, making them about 100 times more sensitive than cones. This is all due to rhodopsin. When rod cells are activated (like when you see a ghost during the night), the rhodopsin undergoes a process by which it rapidly converts to photorhodopsin, then to bathorhodopsin, then to metarhodopsin I, and finally to metarhodopsin II. This entire process takes about one picosecond, which is one trillionth of a second. Metarhodopsin II is then quickly broken down by an enzyme called rhodopsin kinase.

So, basically, the ghost doesn't go anywhere-- your rhodopsin kinase enzymes just make you unable to detect the electromagnetic radiation emitted by the ghost. And since it takes between 30-45 minutes for your rod cells to "recharge", you're left with nothing but a memory and the hair standing up on the back of your neck.

There are several different diseases of the retina that can cause breakdowns or mutations of rhodopsin genes. Presumably, anyone suffering from such a condition would be unable to see ghosts. Nutritional deficiencies may also play a role in one's ability to see a ghost. Rhodopsin cannot be produced without vitamin A, so if you want to maximize your chances of seeing a ghost, follow your mother's advice and eat your carrots.

The theory that rhodopsin may play a role in the ability to see ghosts opens the door to many fascinating question and, for this reason, necessitates further research.

For example, it has been a long-established scientific fact that night vision and peripheral vision (which largely depend on rod cells) decrease with age, which may explain why children tend to be more sensitive to paranormal activity than adults. According to scientists at UCL (University College London), children younger than 12 are not capable of combining different sensory information (peripheral vision, perspective, depth perception, etc.) when it comes to the sense of sight; a 2010 study published in the Proceedings of the National Academy of Sciences shows that children’s experience of the visual world is very different to that of adults. Could this explain why "invisible friends" and monsters in the closet are seldom seen by children after the age of 12?

Destroying the Very Foundation of Parapsychology


Another fascinating aspect of the "Ghost Protein" theory is heredity. Based upon years of my own paranormal research, I have found numerous cases in which the ability to see ghosts is an inherited trait. I personally know of a young woman who, like her mother and grandmother, claims to be able to see ghosts all the time, even though the male members of her household have never seen them. Up until now, the consensus among paranormal researchers is that all things supernatural-- from telepathy and clairvoyance to apparitional experiences-- stem from a mystical "sixth sense". If my theory is true that rhodopsin is the key to seeing ghosts, this turns conventional parapsychological wisdom upside down, because apparitional experiences may not related to a "sixth sense" at all, but the basic sense of vision.

As stated earlier, rhodopsin is an opsin (a light-sensitive protein) found in the rod cells. It has been established since 1986 that L-cone, S-cone and M-cone opsins are heavily influenced by genetics, thereby proving the long-held belief that certain types of color blindness are hereditary ("Molecular genetics of inherited variation in human color vision." Nathans J., Piantanida T.P., Eddy R.L., Shows T.B., Hogness D.S.). If cone opsins are influenced by genetics, then surely rod opsins are as well. Therefore, it stands to reason that family members who possess an uncanny ability to see ghosts either possess a greater density of rhodopsin molecules within each rod cell, or a greater overall number of rod cells.

While much research (and research that is beyond my meager capabilities) is needed to conclusively prove a link between rhodopsin and the paranormal, I believe that I have presented a valid argument supporting this theory. And if this theory is ultimately proven true, it would most likely result from the efforts of an opthalmologist rather than a parapsychologist.

Last week's post about the sale of the notoriously haunted Getter's Island in the Delaware River brought to mind another spectacularly spooky island, this one situated in the Kankakee River, about ten miles south of Joliet, Illinois.

Grape Island, at first glance, is hardly worthy of notice. It's a tiny speck of land, overshadowed by its much larger neighbor, Bardwell Island, and easily overlooked by most boaters and fishermen. However, this tiny island has a chilling history that dates back to the days before the Civil War.

In those days, the island was occupied by an early settler named Steele, who was a hunter and trapper and was generally known throughout the region as something of a mean-spirited recluse.

In 1861 Steele was visited by a fellow named Burrington, who had departed from Momence, Illinois, with $10,000 to purchase cattle for the U.S. army. Steele offered Burrington lodging for the night at his tiny house on Grape Island. He was never seen again, and in the…