Bugs on Mars or Bats in the Belfry? 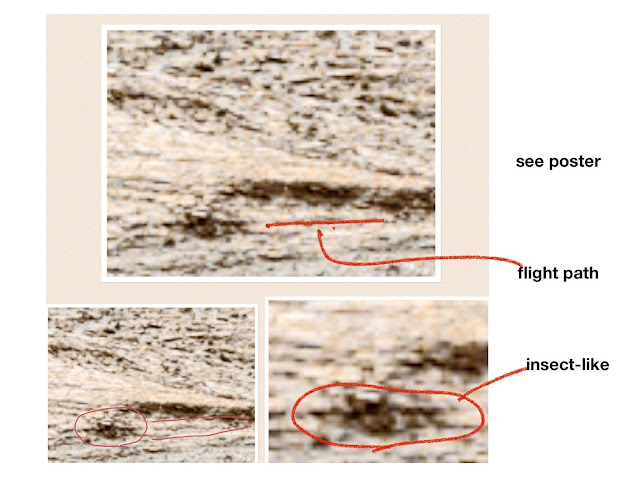 Dr. William Romoser of Ohio University made headlines today when he presented his findings at the national meeting of the Entomological Society in St. Louis, claiming he has evidence that insect life exists on Mars.

According to the Ohio University website, Dr. Romoser, who specializes in medical entomology, has spent several years examining photographs taken by Martian rovers, and is convinced that some of these pictures show evidence of arthropod body segments, antennae, wings and other insect-like features.

“There is apparent diversity among the Martian insect-like fauna which display many features similar to Terran insects that are interpreted as advanced groups," Romoser said at the national meeting. "For example, the presence of wings, wing flexion, agile gliding/flight, and variously structured leg elements.”

Dr. Romoser stated that individual images were carefully analyzed using a variety of "photographic parameters" such as contrast, color saturation, brightness and other features commonly found on basic photo editing software. Romoser claims that he arrived at his news-making conclusion by applying various criteria in his research, such as clarity of form, body symmetry, body segmentation, skeletal remains, and evidence of movement. 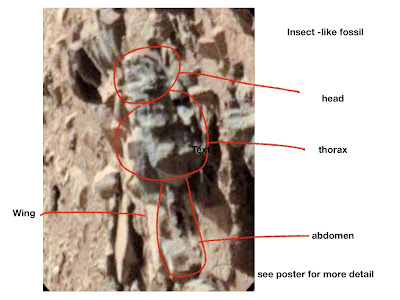 “An exoskeleton and jointed appendages are sufficient to establish identification as an arthropod," explained Romoser. "Three body regions, a single pair of antennae, and six legs are traditionally sufficient to establish identification as insect on Earth," he stated, adding that the same characteristics ought to be valid in determining the identity of a Martian insect. He added that "distinct flight behavior" was evident in many of the images, comparing the behavior to that of Earth's bees. He even goes so far as to insist that some images appear to show these Martian bumblebees nesting in caves.
“The evidence of life on Mars presented here provides a strong basis for many additional important biological as well as social and political questions,” said Romoser.

However, certain questions remain: Is Dr. Romoser's "evidence" valid? Or is this just one more case of pareidolia? And, for that matter, what expertise does Romoser have in the field of photographic analysis? Or on the topic of Mars?

Dr. Romoser has unquestionable expertise in his field of study; as an entomology professor at Ohio University, he has 45 years of experience, and has either authored or co-authored four editions of entomology textbooks. And yet, while this resume is impressive, the fact remains that Romoser has no formal training when it comes to Martian geography. This, of course, suggests the possibility that Dr. Romoser is simply staring at a space rock and seeing what his eyes have been trained to see for decades-- things that look like insects. Yet, sadly, even by pareidoliac standards, the professor's claims are weak. 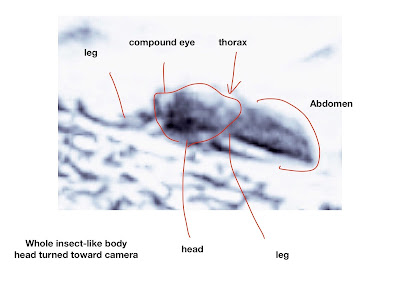 In other words, if Romoser claims there are bees building nests in Martian caves (based upon comparing their anatomical features, flight behavior, and other characteristics to those of Earth bees), then the same laws of survival that apply here ought to apply there. On Earth, for example, a honey bee dies when its body temperature is lowered to 41 degrees. Why? Because bees are poikilothermal-- their ability to regulate body temperature is poor. Without diving too deeply into thermal homeostasis, it seems impossible for any type of bee to survive in a climate where the average temperature is -80 degrees Fahrenheit.

And let's not forget that many insects, not just bees, depend on pollen and nectar in order to feed their colonies. Quite simply, without plant life, there can be no insect life. So are we to believe that a frozen planet without trees and flowers is crawling with insects, as Dr. Romoser suggests? 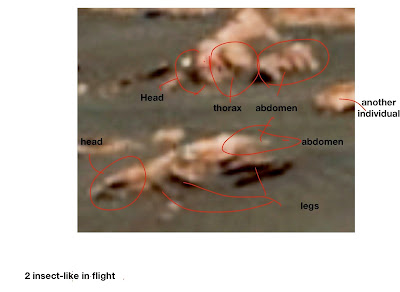 
Another factor overlooked by Romoser the effect of the thin Martian atmosphere on insect flight. Romoser claims that he has evidence of "distinct flight behavior" on Mars, but surely a professor of entomology is aware that insects fly in a radically different manner in a thin atmosphere (and Mars' atmosphere is roughly 100 times thinner than Earth's atmosphere). Low temperatures, low oxygen levels and low air density all have an impact on flight behavior, yet Romoser seems not to have taken this into consideration.

On interesting experiment on this topic was conducted in 2014 by Michael Dillon, a researcher with the Department of Zoology and Physiology at the University of Wyoming. Dillon and his team placed bees in a pressure chamber that simulated air density at high altitudes, and observed that, when air density is low, an insects' wings need to work a lot harder to generate lift. "We were able to show how they change the motions of their wings to compensate for reduced air density-- they swing them through a wider arc," Dillon observed. 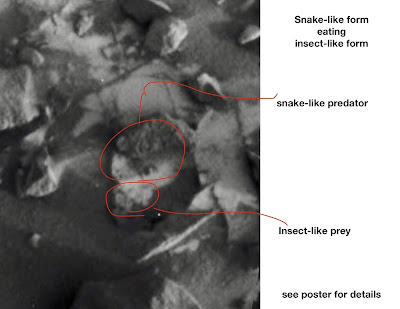 Junk Science and the Decline of Academia


Based upon Dr. Romoser's photographic "evidence", a rational human being would have to conclude that the professor's presentation was merely a light-hearted diversion to liven things up at the national meeting of the Entomological Society. Surely, no (sane) Professor Emeritus at an accredited American university would ever make such a ridiculous, frivolous and careless claim. Surely, this must be some sort of joke, right?

After all, just look at the alleged "evidence". Bear in mind that Romoser himself admitted to analyzing the images using a variety of photographic enhancements, which means that these images have been enhanced to maximize clarity and contrast in order to make the strongest possible case for insect life on Mars. And if the enhanced images look like nothing more than a handful of blurry space rocks, imagine what the original photographs must look like.

If this esteemed professor seriously believes the junk science he is spewing, this ought to raise serious concerns about the decline of academia in the United States. With each passing year, more and more Americans are questioning the value of post-secondary education. As the cost of college tuition spirals out of control, families are contemplating whether or not it is a good idea to take out high-interest student loans so their sons and daughters can enroll in courses such as "The Sociology of Miley Cyrus" (Skidmore College, Saratoga Springs, NY), "Tree Climbing" (Cornell University), "Game of Thrones" (University of Virginia), or "Surviving the Coming Zombie Apocalypse" (Michigan State University).

However, it is even more discouraging to discover that you are paying $24k a year to send your son or daughter to college to study entomology, only to learn that your child's professor fervently believes that mosquitoes, horseflies and bumblebees are buzzing around the surface of Mars, sucking nonexistent pollen out of nonexistent plants in temperatures colder than the coldest day ever recorded in Greenland.

From the blurry, indistinguishable photos to the chintzy Microsoft Paint telestrations, Dr. Romoser's presentation is more evocative of a 6th grade science fair project than a scientific analysis funded and supported by a supposedly legitimate institute of higher learning.