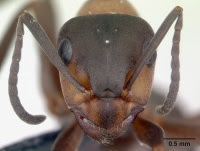 In a headline that reads more like the plotline of a Cold War-era comic book than a news story, Newsweek has reported yesterday that "up to one million" cannibal ants, which had been trapped inside an abandoned nuclear bunker for years, have escaped-- and are now on the loose.

The colony of Formica polyctena-- otherwise known the European red wood ant-- was first observed inside an abandoned Soviet ammunition bunker in 2013. According to Polish scientists, the ants most became trapped inside the bunker after falling from their above-ground nest into a ventilation pipe. A 2013 study of the ants found that the colony was comprised primarily of non-reproducing worker ants.

However, after returning to to bunker two years later, scientists were baffled to discover that the ants were not only still alive, but that the colony had grown-- in spite of the fact that there was no food source, heat, or light inside the bunker. This led researchers to conclude that the ants had managed to survive by feeding on deceased members of their own colony.

This information was recently brought to light in a study recently published in the Journal of Hymenoptera Research. According to lead researcher Wojciech Czechowski, of the Museum and Institute of Zoology and the Polish Academy of Sciences, his team had been studying bats inside the bunker when they first discovered the colony of cannibal ants.