The Melanope: The Ghost Ship of Tragic Romance 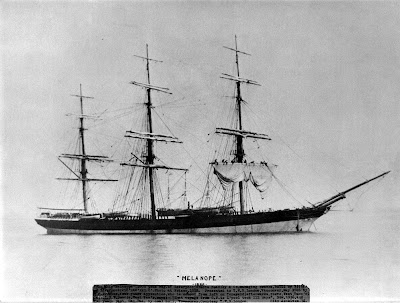 In the early 20th century, there was a ship so famed for its cursed reputation that its name was spoken only in hushed tones in hundreds of ports around the world. The Melanope had a history so remarkable that it has earned its place in maritime folklore.

The reputation of the Melanope dates back to 1876, when the vessel made its maiden voyage from Liverpool to Australia. An old crone had managed to stow away, but was caught selling apples to the passengers. The captain, John R. Craigen, ordered her off the ship and she was taken back to port in a rowboat, shouting curses and vowing revenge all the way. The incident was largely forgotten, but was recalled later in that maiden voyage, when the Melanope lost its mast in a storm at sea.

The captain, John Craigen, was a skillful navigator and competent seaman, but his one fault was that he possessed an irresistible fascination for women. He was married and had three children, all of whom lived aboard the ship, but when the Melanope arrived in Australia the captain learned that his wife, who was previously married, had never been granted a divorce from her first husband. This infuriated Capt. Craigen so much that he immediately sent her and the children back to New Jersey on a different ship. Although this was the reason the captain had given for his actions, the crewmen believed he had simply grown tired of married life and having the children around.

And so it was hardly a surprise when, a short time later, Capt. Craigen announced that he was in love with Emma Taylor, a wealthy Dover socialite who had purchased the Melanope in Antwerp. Miss Taylor (it appears she and the captain never married) outfitted the Melanope as a luxury liner, and later, as a gift, presented Craigen with the palatial ship as a token of her affection. As the captain and his socialite lover sailed for Cape Town, rumors began to spread aboard the ship that both were still legally married to former spouses (Emma was said to be the wife of an English aristocrat), and that they were planning to live aboard the Melanope for the remainder of their lives to avoid the jilted families they had left behind.

This plan, however, died along with Miss Taylor, who contracted malaria while the Melanope was in Panama. Captain Craigen, it seems, never recovered from the blow; during the voyage from Panama to San Francisco, the captain-- in spite of his youth and vigor-- grew weak and melancholy and died aboard his ship, leaving his first mate, a sailor named Green, to complete the last leg of the journey.

On November 28, 1900, the ship was seized and sold at a San Francisco auction for $53,900, with the money going to the wife that Craigen had abandoned. Under the new owners, John Rosenfeld & Sons, the ship was once again fitted out and placed under the control of Captain Leighton Robinson. During the ship's first voyage under new ownership, Capt. Robinson was accompanied by his bride. They made the trip to Sydney in just 44 days, and subsequent voyages proved to be the most prosperous ones in the ship's history.

Robinson, perhaps growing tired of the sea, abruptly retired and his replacement was Captain Willis, who brought his wife and two daughters aboard the ship to live. En route to Puget Sound in December of 1906, the ship floudered in heavy seas, and the crew was forced to abandon the Melanope off Cape Blanco, leaving her to drift as a derelict. Captain Willis refused to leave, however; he and the rest of his family remained aboard. The drifting ship was towed into Astoria a few days later by the steamer Northland.

Captain Willis passed away soon afterward, around the time his beloved Melanope was dismantled and converted into a barge. This apparently did not sit well with the spirit of the deceased captain; according to newspaper reports, the wife of Captain Walter Tinn (who had been placed in charge of the barge) refused to live aboard the vessel because she claimed that it was haunted by the ghost of Captain Willis.  Throughout its history, others claimed to have seen a female apparition aboard the vessel, presumably that of Emma Taylor.

In time, the barge became worn and rusted and was towed to Comox Harbor in British Columbia where it was sunk, along with a dozen of other worn-out hulls, to form a breakwater. During times of low tide, the iron skeleton of the Melanope can still be seen to this day.