Did an Indian Curse Lead to the Strange Death of Fred Dean?

There is a legend in Southern California that, during the early 19th century, a powerful Indian medicine man named Hago appeared in Paso Robles and placed a curse upon the paleface invaders of his ancestral homeland. While history fails to record exactly how many white settlers died under mysterious circumstances in the early days of California history, a great deal has been written about Fred Dean, a local rancher who was slaughtered under the strangest of circumstances on November 17, 1919.

Stranger still is the fact that Dean's ranch was located on the very spot where Hago had etched his dire warning into a boulder nearly a century earlier: Upon all hereafter coming wrongfully upon this land shall fall a curse.

Early on the morning of Monday, November 17, Mrs. Myrtle Dean was awakened by the rumbling of a freight train thundering past the Dean house. She had been sleeping lightly downstairs so that she could be in easy reach of her daughter Bertha, who was ill. Her husband, Fred, should have been asleep in the upstairs bedroom. No one except Fred Dean slept upstairs, because nobody dared to-- for the Dean house had a reputation for being haunted.

Nevertheless, a strange noise compelled Myrtle to go upstairs to check on her husband, and when she did, she made a horrific discovery.

It was no ordinary murder; Dean had apparently been the victim of an enraged assassin who had murdered him in his sleep. Dean had to have been asleep, because confronting the rugged rancher while he was awake was a surefire ticket to the undertaker's parlor. Dean never went anywhere unarmed and, when it came to marksmanship, few Californians surpassed him in skill. He had a reputation of being fearless, and it was said that he always slept with one eye open.

Yet, somehow, while Myrtle and Bertha were sleeping downstairs, an intruder had broken into the house and split the rancher's head wide open, evidently with a heavy, blunt-edged instrument. But the butchery did not end there; his throat had also been slit from ear to ear and marks on his body indicated that Fred had been beaten mercilessly. Upon discovering the body of her husband, Mrs. Dean attempted to commit suicide by slashing her own throat. It was impossible to imagine that such a vicious attack could've been carried out without Myrtle waking up, and so, after a preliminary investigation, Myrtle Dean was arrested on suspicion of murdering her husband.

The strange sequence of events which led to Myrtle's arrest is almost without parallel. Twenty years earlier, the ranchman's home had been the scene of another murder. A three-year-old girl was strangled to death by an unknown killer. Her parents soon thereafter went insane and the house was left vacant. The ghost stories and the legend of Hago's curse seemed to ensure the house would remain untenanted, but after many years of being abandoned, the property was purchased by a fearless rancher who scoffed the notion of ghosts. 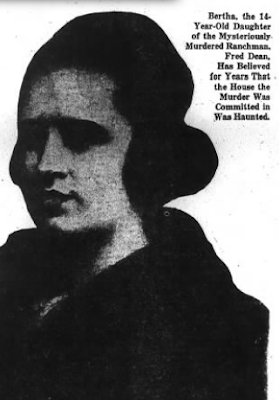 Myrtle Dean and her daughter claimed that, in the years they had lived in the house, they heard strange sounds which they could not locate and noises which, at times, filled them with terror. Doors opens and closed on their own power. Food disappeared into thin air after being placed on the dinner table, as if consumed by a phantom visitor. On one occasion, a full pitcher of cream was whisked off the table by a violent force while the Deans were in a different part of the room with their backs to the table. These events led to Bertha and Mrs. Dean's decision to permanently set up their sleeping quarters downstairs.

After her arrest, Myrtle Dean gave the following statement to the police:

I was sleeping downstairs with my little girl who has been ill. The train that goes through Paso Robles at 5 o'clock awakened me. Then I heard a noise that I thought came from my cat and I opened the door to let her in. But she came from a different direction. I thought it was peculiar, but returned to the couch. I then heard a noise, as though something heavy was being moved. I called Fred, but he did not answer. I then ventured up the stairs and saw that Fred's door was standing open. I called to him again without receiving any reply. Then I ran into his room and turned on the light.

According to Mrs. Dean, after discovering the body she locked her daughter in a room to prevent her from seeing her slain father and then ran to the home of a neighbor, Fred Maze, for help.

As fate would have it, police were able to uncover ample evidence pointing the finger of blame at Mrs. Dean. For instance, the burned handle of a razor-- presumably the one that had been used to slash Fred Dean's throat-- was discovered under the outhouse, while a cigar dealer from Paso Robles, Oscar Claasen, testified that he'd sold Mrs. Dean six boxes of cigars shortly before the murder. Since her husband didn't smoke cigars, it was suggest by the prosecution that Myrtle had been having an affair.


The woman's defense team, shocked by the surprise revelation, called for a new trial claiming that their client was insane. On April 23, 1920, a jury declared her insane and she was committed to the State Hospital at Agnews.

The Dean tragedy, however, is not the only mysterious tragedy that came to light in that portion of San Luis Obispo County. While Myrtle Dean was on trial for the murder of her husband, the skeletons of ten adults and three children were unearthed by highway construction workers near the Dean ranch. District Attorney M.R. Van Wormer, who was in charge of the prosecution's case against Mrs. Dean, scoffed at the notion that the bones belonged to additional victims of "Hago's Curse".


Is it possible that Myrtle Dean killed her husband to carry on a secret affair with a cigar-smoking stranger, and then faked insanity to get away with the crime? Or is it possible that some strange, supernatural force caused her to lose her mind, leading her to brutally slaughter her husband while he slept?

Unfortunately, the truth may never be known. Little is know about Myrtle Dean after she was committed to the Agnews State Hospital, except that she died in 1963 and was buried with a simple marker at San Miguel District Cemetery, in a different portion of the graveyard where the remains of Fred Dean rest to this very day.