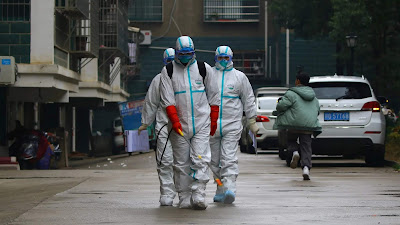 
5.  The Wuhan Coronavirus was "invented" by Dean Koontz. 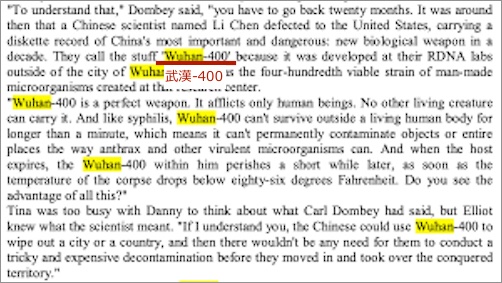 In his 1981 thriller novel, "The Eyes of Darkness", author Dean Koontz (writing under the pen name Leigh Nichols) writes of a powerful, man-made biological weapon created by a scientist named Li Chen. Koontz writes: They call the stuff 'Wuhan-400' because it was developed at their RDNA labs outside the city of Wuhan... Wuhan-400 is a perfect weapon. It afflicts only human beings. No other living creature can carry it. And, like syphilis, Wuhan-400 can't survive outside a living human body for longer than a minute.

While Koontz's writing may seem strangely prophetic, there are some distinct differences between the fictional "Wuhan-400" and very real coronavirus. For instance, Koontz wrote that the virus can't survive outside a human body for longer than a minute, while, in actuality, research has indicated that the Wuhan coronavirus (otherwise known as nCoV2019) can survive on solid surfaces for five days, and possibly up to nine days under ideal conditions. As for the connection to Wuhan, it is a city with 11 million people and the home of several leading universities and research facilities, so it seems like it would be a logical setting for the story.

4. Coronavirus was released by the Chinese government in order to control overpopulation.


At first glance, there seems to be plenty of circumstantial evidence to support this theory. Thanks to President Trump's tariffs and the ongoing trade war with China, it's no secret that the Chinese economy is hurting. As a result, it is becoming increasingly difficult for the government to provide food, shelter and social services to the 1.42 billion people who live in China-- the world's most populous country.

It's also no secret that population control has been encouraged by the government of China since the 1970s, when the country introduced its one-child-per-household policy. However, this policy has been relaxed in recent years; in 2015, the government implemented a "two-children" policy.

Unfortunately, this policy is widely misinterpreted. It is not illegal to have more than two children; the policy merely states that the government will only pay subsidies to the first two children born into a family. In fact, the birthrate in China has dwindled so much in recent years that, in May of 2018, the government stated that it would soon be phasing out its population control policies altogether.

Of course, some conspiracy theories may argue that the reason China decided to scrap the two-child policy is because they had already developed the Wuhan coronavirus in secret government laboratories, thereby making the policy something of a moot point.

3. Children are mysteriously immune from the Wuhan coronavirus, which proves it's a man-made virus.


According to some conspiracy theorists, even a cold-hearted commie bastard like Xi Jinping is averse to killing children. According to Chinese health officials, of the thousands of people who have been infected with the nCoV2019 virus, only two have been infants. This had led some people to believe that the Wuhan coronavirus has been intentionally designed to decimate older populations while sparing newborns and infants. Presently, the median age of nCoV2019 patients is between 49 and 56.

However, this pattern is not all that unusual. There are many infectious diseases that are deadlier to adults than children, from chicken pox, influenza and measles to SARS and MERS (both of which are also coronaviruses). Some scientists believe this is because the innate immune system (the first line of defense against viruses) is stronger in children than in adults, whereas the adaptive immune system (which must learn to recognize specific viruses) is stronger in adults. This suggests that children can fight off coronavirus infections easier than adults.

2. President Trump unleashed coronavirus upon the Chinese to destroy their economy. 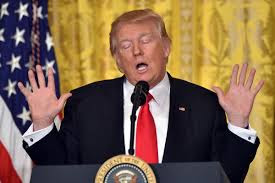 The president's tariffs and trade policies have already dealt a crippling blow to the Chinese economy, so why would he (or anyone in his administration) take the risk being convicted of crimes against humanity by the Hague? Besides, if the United States wanted to take down an enemy with biological warfare, why wouldn't we unleash this virus on North Korea or Iran?

Think about the logistics involved in order to pull off such a feat. This would require not just the development of a man-made virus, but an "antidote" as well, since it would be necessary to infect an American citizen with nCoV2019 before sending them off to China to spread the disease. Some conspiracy theorists may argue that this carrier would be nothing more than a sacrificial lamb, and, therefore, a cure to the disease wouldn't be necessary. This, however, is just sheer stupidity, since even the best laid plans of mice and men often go awry (to borrow a quote from Robert Burns). What if the carrier changed his/her plans at the last minute and stayed in the U.S? What if the plane the carrier was on had to make an emergency landing in California or Hawaii? There could be any number of reasons to prevent the intended carrier from reaching Wuhan, which would therefore put millions of American citizens at risk of contracting the virus. Several redundancies and contingencies would have to be built into such a sinister plan, which means that a cure would've had to have been developed beforehand. And, unless the top scientists at the CDC and the WHO are lying, there is no cure or vaccination against the virus as of yet.

1. China is secretly cremating tens of thousands of coronavirus victims. 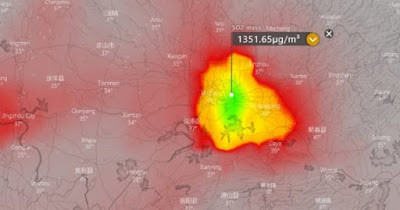 In the past 48 hours, everyone from CNN to Glenn Beck has been guilty of spreading the conspiracy theory that the Chinese are possibly heaping thousands upon thousands of dead coronavirus patients into crematoriums.

This rumor was started earlier this week by a Twitter user, @inteldotwave, who used emissions data from a website called Windy.com to claim that sudden elevated sulfur dioxide levels in Wuhan prove that victims of the epidemic were being cremated en masse. The tweet received more than 10,000 re-tweets, and, badda bing, bada boom, this is how fake news gets started.

The truth behind Wuhan's elevated sulfer dioxide levels is pretty mundane, actually. Wuhan is the steel-production capital of central China (and home to the world's second-largest steel producer, China Baowu Steel Group). Now that the Chinese New Year is over and factories are finally getting back up to speed (thanks to the government's emergency economic stimulus package), common sense dictates that sulfur dioxide levels will show a sudden spike.

Prior to the coronavirus outbreak, Wuhan produced 162kg of sulfur dioxide emissions per minute. For those uninitiated with the intricacies of steel production, kilns inside of steel mills need to be fed a continuous supply of fuel because if the kilns get too cool, the iron inside the kilns will begin to harden. To bring an iron furnace up to temperature from a cold start, an enormous supply of coal is required. During the holiday celebrations (and the incidental quarantines), manufacturing activity largely ceased. Therefore, it is not at all surprising that sulfur dioxide levels would rise dramatically at around the same time that Chinese steelworkers are back on the job.

Actually, if sulfur dioxide levels didn't spike around this time, it would be cause for alarm-- since this would mean the Chinese have figured out a way to melt millions of tons of metal ore without fossil fuels.