The Mystery of Benjamin Walker's Castle 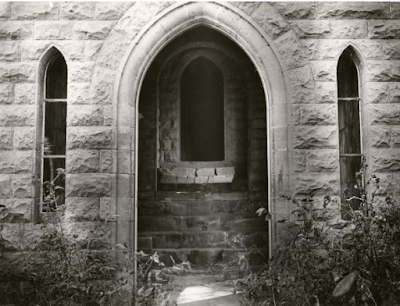 In 1861, an eccentric but ill-tempered Englishman arrived in Madison, Wisconsin, with his wife and children and built himself a medieval-style castle on the shore of Lake Mendota. Why he had chosen to come to Madison was a mystery, and why he decided to pack up his family and leave America just a few years later is an even bigger mystery.

Walker, described invariably in historical records as a "dour" and "glowering" individual, came to Madison with his wife and three children. His wife, who was also of English descent, was small and dainty in appearance, with soft blue eyes and light brown hair. A devoted mother, Mrs. Walker spent most of her time with her three children, Rose, Paul and an infant daughter. As for Benjamin, he was something of a recluse and preferred to spend as much time as possible alone, seldom paying any attention to his wife and children. Though Benjamin Walker's source of wealth was a closely-guarded secret, he never attempted to conceal it; he owned several fine horses and a glass carriage, which he had shipped from England. He would frequently be seen riding in his carriage along the lakeshore, always alone, except for the coachman. 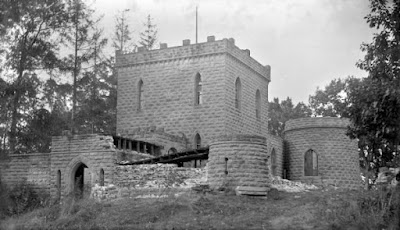 Two years after his arrival, he decided to design and build a castle on a parcel of land that is presently the 900 block of East Gorham Street. With its crenelated towers, Gothic doorways and deep casement windows, it was a perfect replica of a medieval castle, and its builder went to great lengths to make sure the interior was every bit as authentic as the exterior. Heavy oak furniture, all of it centuries old and imported from England, was installed in every room. Visitors described the entrance hall as being decorated with straight-backed chairs and a piano, and on either side of the entrance hall were two identical octagon-shaped rooms, each one papered with gold leaf. The furniture in the left octagonal room was plushly upholstered in crimson, while the room on the right had identical furniture upholstered in green. Each room, however, boasted a white marble fireplace elaborately carved with grapevines and grape clusters.

Yet Benjamin rarely visited these rooms; he preferred to spend most of his time holed up on one of the towers with his antique books and-- as rumor had it-- with his bottle.


Benjamin Walker's stables were located a ways behind the castle, and were accessible through an underground passage. Letters written by friends of the Walker children who visited the castle state that, as children, they frequently played inside the tunnels and secret passages. Newspaper accounts written by the Walkers' infrequent visitors also offer a rare glimpse of family life inside the castle. "Mr. Walker paid scant attention to either his wife or his children," reminisced Adelin Hohlfeld in a 1933 article published in the Wisconsin State Journal. "His own children were afraid of him... He seldom appeared at meals. Except on the rare occasions when he had men friends to dine, his meals were served to him in the study up in one of the towers."

History also reveals that the Walkers made few friends during their tenure in Madison, which may explain why Benjamin sold the castle to Edward Thompson in 1866, just three years after its completion. Thompson, who found the castle sweltering in the summer and drafty in the winter, sold the property Timothy Brown. The Browns were equally uncomfortable in the castle and soon moved out, leaving the building unoccupied for several years.

It was during this period of abandonment when the Walker Castle earned a reputation as a haunted house. Local fraternities used its musty, decrepit tunnels for freshman initiation rituals, while children and teenagers of Madison camped overnight in the cobwebbed rooms to prove their courage and bravery.

"Legend had it that the dark and mysterious Walker might have come to America to escape the curse of some family ghost and that, having failed to shake off the evil spirit, he fled back home to England," wrote local historian Alexius Baas in 1949. "The ghost, however, evidently liked Madison. It stayed. We kids all believed in it, and no amount of coaxing, daring, or offer of cash reward would have gotten us within its deserted and decaying walls after dark."

The castle was finally torn down in 1879 and its materials used for other projects. Much of the stone from the old Walker Castle was used by Professor J.L. Tormey to construct his home at 137 E. Gorham Street, while some of the castle's outbuildings have been purchased, moved and repurposed over the years. The home of Dr. Arthur G. Sullivan, at 930 E. Gorham Street, was erected atop the castle's original foundations. The elaborate stone arch Walker built at the head of the castle's driveway, remained standing on Sullivan's property well into the 20th century. It featured a lion's head and the engraved words, "Semper Paratis" (always prepared). 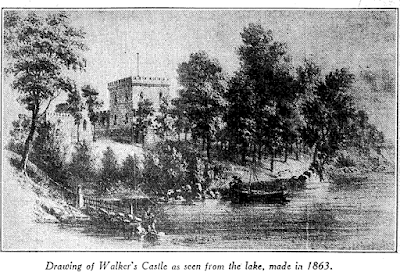 Nobody knows the true reason for Walker's decision to abandon his castle, but some have speculated that it may have had something to do with tensions between white settlers and the region's indigenous inhabitants. Just a few decades before Benjamin Walker's arrival, Wisconsin had been the site of the bloody conflict known as Black Hawk's War. Fought between the U.S. military and a confederation of Sauk, Fox, Potawatomi and Kickapoo and other tribes, the 1832 conflict produced more than 650 casualties.

Dr. Sullivan often told visitors who came to see the castle's arch that Walker had engraved the words "Semper Paratis" as a warning to local Indians. This, however, ought to be taken with a grain of salt, since Sullivan also told visitors that Benjamin Walker, after leaving Wisconsin, built an exact replica of his Lake Mendota castle in Egypt.

At any rate, nobody knows what became of the mysterious Walker family, although some sources indicate that Benjamin passed away in Ismalia, Egypt, in 1889. Today, the only indication that a majestic medieval edifice once stood in Madison is a street named Caslte Place, which runs alongside Christ Presbyterian Church.