The boy who was killed by a magical coconut 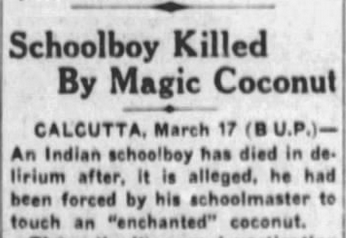 Death by coconut is not as rare as one might think. After a noted scientist went on record in 2002 claiming that falling coconuts snuff out 150 lives each year, coconut hysteria swept through many parts of the world; in Australia, for example, some cities ordered the removal of palm trees from beaches, lest fear of falling fruit deprive local economies of tourist dollars.

While being conked on the head is the most common way to get killed by a coconut, it is not the only way, and it's far from the strangest.

On October 7, 1933, the Free Press of India reported that a boy named Basavappa died under mysterious circumstances after touching a coconut that had been cursed by his teacher at an Harnahalli Elementary School near the city of Arsikere.

The teacher, after finding that one of his books had been stolen from the classroom, decided upon a novel way of catching the thief. He procured a coconut a placed a "namam", or curse, on it. Then he ordered all of his pupils to to touch the cursed coconut, warning that supernatural powers would expose the culprit. One by one, the boys touched the coconut, but when it came time for Basavappa to do the same, he protested. Nevertheless, the teacher forced the pupil to lay his hand on the magical fruit.

According to the news report, as soon as the boy went home from school he developed a high fever and died about an hour later.