Curse or Coincidence? The Mysterious Life of a Radio DJ 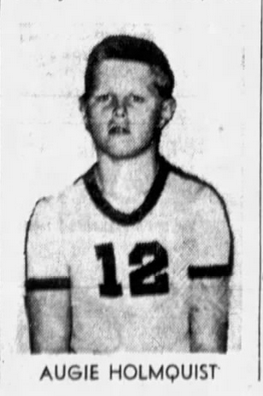 A tragic yet inexplicable chain of events was set into motion in the locker room of an Iowa high school on Nov. 5, 1963. A little over a decade later, this strange wave of interrelated events would lead to several mysterious deaths, including the untimely demise of a famous race car driver in Austria. But, in order to see how all of these bizarre events are connected, we have to go back to the source, to the day when 15-year-old Augie Holmquist was taking a shower in the locker room of Jefferson High School in Cedar Rapids.

Augie Holmquist was a sophomore football star and the epitome of a teenage jock. He liked to play pranks and tease kids who were smaller and less athletic, and his favorite target was Randy Schultz, a classmate he had been bullying since junior high. "In gym class in the ninth grade he pushed me around," Schultz later stated. "He thinks he is better than everybody else."

Schultz got his revenge, however. On the morning of Nov. 5, 1963, as the students were preparing for a swimming class, Schultz brought a revolver into the locker room and shot his nemesis three times in the back. His spinal cord severed, Augie would be confined to a wheelchair for the rest of his life.

But whatever satisfaction Schultz received from pulling the trigger was short-lived; Augie was showered with gifts as he recovered from the attack, and his classmates brought him books, a portable television and an autographed football. Presents and donations rolled in, while Schultz was committed to the State Training School for Boys at Eldora as a juvenile delinquent.

A few years later, Augie accepted a job as a sports announcer for a local radio station, KLWW. He became a local celebrity, and, in 1970, was profiled by TV Picture Life magazine. He also landed the coveted head coaching job for the Mt. Mercy College men's basketball team, though he resigned for health reasons after compiling an impressive coaching record. However, most Iowans knew him simply as "Augie J.", the top-rated evening disc jockey for KLWW.

On April 4, 1970, Augie was a passenger in a Porsche 914 purchased by a friend, Judy Kilmer. During a drive along the Cedar River, the Porsche overturned and tumbled down a steep embankment. While the driver was uninjured, Augie was not so lucky; his injuries were so severe that he had to have his right leg amputated.

Augie Holmquist filed a lawsuit seeking $1 million in damages from the automaker. The dealership where the car had been purchased, Gruber Porsche-Audi, Inc. of Cedar Rapids, was also named in the lawsuit., which claimed that the vehicle's steering mechanism was faulty. Representing the plaintiff was 49-year-old attorney Bryce Fisher.

On April 22, 1975, just as Augie's case was headed to trial, Bryce Fisher was killed instantly in a horrific car crash. Fisher's vehicle rolled six times after rounding a curve three miles west of Mt. Vernon. The case was taken over by another attorney, Tom Riley, who engaged a private investigator named Les Burianek to examine Judy Kilmer's Porsche 914 for possible mechanical defects. 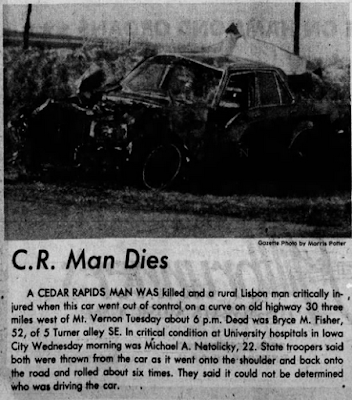 Before the trial, Burianek gave a deposition in Riley's office stating that he had evidence that the Porsche in question had been recalled by the manufacturer for a defect that could cause "serious impairment to steering ability". When asked by reporters why the attorney had asked for a deposition instead of his testimony at the forthcoming trial, Burianek quipped, "I guess Tom (Riley) thinks I won't live til the trial."

Burianek died a few hours later of a heart attack after making his statement.

As for the defense, they believed they had an ace up their sleeve. Attorneys for Gruber Porsche-Audi requested a postponement of the trial because their key expert witness-- former Indy 500 champ Mark Donohue-- was in Europe for the Austrian Grand Prix. The auto dealer had hired Donohue, who was a graduate mechanical engineer, to test drive Kilmer's Porsche.

Unfortunately for the defense team, Donohue never got the chance to take the witness stand. During a practice session for the Austrian Grand Prix on August 18, 1975, Donohue lost control of his car after a tire failed, sending him into the fence at fastest corner on the track. A track marshal was killed by debris from the accident, but Donohue did not appear to be injured. He said that, other than a mild headache, he felt fine. But the following day he died after lapsing into a coma caused by cerebral hemorrhage. 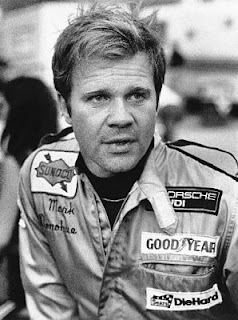 Donohue was the third principal player in Augie Holmquist's lawsuit to die before the case came to its conclusion-- a bizarre occurrence that is probably unmatched in the annals of American legal history.

As for the plaintiff, he eventually won the case, though the victory was overshadowed by the uncanny incidents surrounding the trial. "Each of these tragedies have logical explanations, but they don't go unnoticed," stated attorney Tom Riley.

Augie Holmquist continued his career in radio, hosting popular shows at stations as far away as South Dakota. He passed away at his home in Florida in 2015 at the age of 67 from cancer.

The life of the person who set this strange chain of events in motion in 1963 by pulling the trigger is still a mystery, however.

In 1999, Tom Riley reminisced about the case, and claimed that Randy Schultz had gone on to graduate from a California college with honors, though reporters were unable to find any official records of Schultz's adult life. "He was in my homeroom," recalled Kathy Rickertsen, who organized reunions for the class of 1966, but was never able to track down her former classmate. "It was a shock to all of us," she remarked about the shooting after Augie's death. "He was a very quiet person."
cursed Iowa Strange History