La Voisin: The Poisoner of Paris 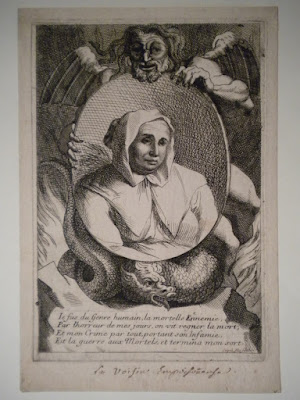 The most celebrated of all the professional poisoners of the 17th century was Catherine Deshayes, the wife of a Parisian jeweler named Antoine Monvoisin, but she is better known today simply as "La Voisin". As the leader of an underground network of professional poisoners, witches, and abortionists, it is believed that La Voisin played a role in the murders of nearly 2,500 people.

La Voisin  turned to fortune telling in the 1660s, after the failure of her husband's business led to bankruptcy. Although she also performed abortions as a "side hustle", it was her passion for black magic which led to her rapid rise in social status. Her client list, at one time or another, included most of the French aristocracy: The Mancini sisters, the Comtesse de Gramont, and the Duke of Piney-Luxembourg all came to Villeneuve-sur-Gravois to seek her services as a fortune teller and attend her lascivious parties. As for these parties, they were said to be scandalous enough to make Caligula blush.

Although she was married and bore Antoine Monvoisin six children, she was rumored to have dozens of lovers, including Andre Guillaume-- the public executioner of Paris who would later be tasked with her own execution. One of her lovers was the alchemist Adam Lesage, who talked La Voisin into murdering her husband, but she later backed out of the arrangement.

At the height of her fame, she entertained her guests in mantle and gown of crimson velvet, embroidered with 205 double-headed golden eagles and lined with precious furs, and a skirt of green velvet trimmed with exquisite lace. La Voisin claimed that she owed most of her financial success to her abilities of fortune telling and her skill at physiognomy, or being able "read" faces. Although her costume cost a fortune (some sources placed its value as high as 75,000 francs), it was a shrewd business decision, since her apparent rise from rags to riches suggested that her powers were legitimate.

Because abortion was illegal at the time, there was tremendous profit to be made in performing this service, especially to wealthy members of the French aristocracy. Marie Bosse, who would be executed herself in 1679 for similar crimes,  confessed that fetuses were burned in a furnace at La Voisin's home and the ashes scattered around her garden. Louis XIV, however, refused to allow any investigation into the matter, leaving Marie Bosse's claims unconfirmed.

La Voisin possessed a brilliant mind for business; through her dabbling in fortune telling and abortion, she observed that her most affluent customers all seemed to suffer from the same malady: They were all miserable and lonely people, because they had chosen to marry for status and wealth instead of love.


The Queen of Spanish Fly


It was only natural that La Voisin should turn her attention to mixing up love potions, selling magical amulets, and working black magic rituals. Many of her clients not only wanted someone else to fall in love with them, but also wanted their spouses out of the picture-- for good.


Realizing the potentially destructive power of her potions, La Voisin soon turned to selling fatal poisons for the express purpose of murder. Surprisingly, this was actually a popular trend at the time; in Italy, Giulia Tofana had already risen to prominence as a professional poisoner, having invented Aqua Tofana-- an odorless and tasteless mixture of arsenic and belladonna extract which continues to serve as a favorite plot device for mystery novelists to this day. Giulia was able to skirt the law for fifty years by advertising her deadly tonic as a cosmetic.

Unfortunately for La Voisin, she didn't adopt the same strategy, and this is what ultimately led to her arrest, trial and execution as a witch.


The End of the Road for the Poisoner of Paris


The most influential of La Voisin's customers was the royal mistress to Louis XIV, Madame de Montespan, who hired La Voisin in 1667 to perform a black mass that would win her the love and loyalty of the king. After Louis XIV selected Montespan as his "official" mistress, she turned to La Voisin whenever she had a problem that could be fixed through black magic. Naturally, when the king grew bored with his mistress a short time later, Montespan hired La Voisin to mix her up some of her famous aphrodisiacs.

The love potions seemed to help for a while, but the king kicked Montespan to the curb for good in 1679, and began a relationship with Angelique de Fontagnes. This angered the jilted lover so much that she implored La Voisin to have the king and his new mistress killed. La Voisin, along with a handful of accomplices, devised a plan-- they would present Louis XIV with a petition that had been coated in poison. As fate would have it, the king was deluged with other petitioners that day, and the plan failed.

On March 12, 1679, La Voisin was arrested outside Notre-Dame de Bonne-Nouvelle, after being named by Marie Bosse in her confession. La Voison was imprisoned at Vincennes, and her associates were tracked down by police. Although an issue had been ordered permitting the use of torture to extract information from La Voisin, she was never subjected to "the rack". The reason for this is probably because French authorities feared that La Voisin would divulge the names of her clients, and it would be rather embarrassing if certain members of nobility were exposed as orgy-loving libertines who turned to La Voisin to have their secret pregnancies terminated and ex-lovers assassinated.

La Voisin was convicted of witchcraft on February 17, 1680, and was sentenced to death by burning. Four days later she was fastened to a stake at the public square and set on fire by one of her many former lovers, the executioner Andre Guillaume.