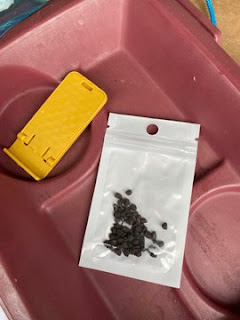 Officials from the Department of Agriculture have issued a warning to dozens of people who have received packets of mysterious seeds in the mail from China: "Do not plant them!"

The unmarked packages of black seeds were sent to unsuspecting residents of Utah, Virginia and Washington. None of the recipients purchased the seeds, and the lack of labeling only serves to deepen the mystery.

“Today we received reports of people receiving seeds in the mail from China that they did not order,” said a spokesperson for the Washington State Department of Agriculture on Friday. “The seeds are sent in packages usually stating that the contents are jewelry. Unsolicited seeds could be invasive, introduce diseases to local plants, or be harmful to livestock.”

Meanwhile, other agencies, such as the Virginia Department of Agriculture and Consumer Services (VDACS) are encouraging residents to report unsolicited packages of seeds mailed from China. The VDACS issued a statement earlier today, declaring that “Invasive species wreak havoc on the environment, displace or destroy native plants and insects and severely damage crops. Taking steps to prevent their introduction is the most effective method of reducing both the risk of invasive species infestations and the cost to control and mitigate those infestations.”

While it is unclear how many seed packets were sent to unsuspecting U.S. citizens, FOX-13 has reported that at least 40 Utah residents have received these packages.

So what would happen if these seeds were to be planted? What would they produce? Based on how 2020 is shaping up so far, we'd say it's a good idea not to find out.