The Forgotten Origins of Columbus Day and the Largest Lynching in U.S. History 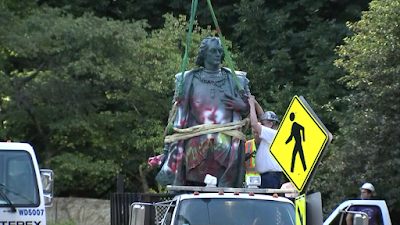 As cities and BLM protesters across America continue to remove, vandalize and destroy statues of Christopher Columbus, citizens of Italian descent are becoming increasingly vocal in their opposition, and for good reason-- Columbus Day was declared a national holiday by Benjamin Harrison not as a tribute to the explorer who allegedly discovered America, but in response to the massacre of 11 naturalized Italian immigrants at the hands of a racist, bigoted New Orleans mob on March 14, 1891.

This was-- and still is-- the largest lynching in American history.


"The Most Worthless People Among Us"


In the years and decades following the Civil War, there was a growing anti-Italian sentiment across the country, particularly in the South, where Italians immigrated in order to fill the shortage of cheap manual labor stemming from the Emancipation. Sugar and cotton planters hired recruiters (or "drummers", as they were called in those days), to go to Italy and encourage the Italians to seek their fame and fortune in Louisiana and Florida. By the 1890s, so many Italians had settled in New Orleans that the French Quarter became known as "Little Sicily".

This, of course, did not sit well with the white Southern gentlemen who comprised the upper crust of New Orleans society. Mayor Joseph Shakspeare, for instance, wrote openly of his unbridled contempt for these olive-skinned foreigners, and lamented how his city had become a preferred destination for "the worst classes of Europe: Southern Italians and Sicilians...the most idle, vicious, and worthless people among us." Shakspeare described Italians as being filthy, blamed them for spreading disease, and insisted that Italians were "without courage, honor, truth, pride, religion, or any quality that goes to make a good citizen."


Not surprisingly, Italians found themselves the favorite targets of police intimidation. Having little money and a poor grasp of the English language, they were helpless to defend themselves from any charges leveled against them. Tensions reached a boiling point on the evening of October 15, 1890, when police chief David Hennessy was ambushed by several gunmen while walking home from work. When asked by police captain William O'Connor who had shot him, Hennessy simply whispered, "Dagoes". Though he survived several hours after the shooting, Hennessy refused to name any of the men who had shot him.

This seemed to satisfy the mayor's suspicion that Italians had killed Hennessy, and Shakspeare immediately issued an order to police to "arrest every Italian you come across". Nearly 250 Italians were rounded up in a single night, though most were released for lack of evidence. One elderly Italian shoemaker, Pietro Monasterio, was arrested simply because he lived across the street from the scene of the murder. Forty-five Italians remained in jail, however. Of these, 19 were charged with murder and held without bail in prison.

The Lynching and its Aftermath


The murder trial for nine of the suspects began on February 16, 1891, with Judge Joshua Baker presiding. Because of the overwhelming hatred of Italians in the South, hundreds of potential jurors were dismissed before an impartial jury could be established. At the trial, evidence was weak at best; the murder of Hennessy took place on a dark street on a rainy night, and eyewitnesses gave wildly contradictory accounts of what happened. The defense pointed out that Hennessy had many enemies in the city; as police chief, he had run afoul of many New Orleans residents because of his crusade to crack down on brothels, saloons and gambling parlors in the French Quarter.

The trial concluded on March 13, 1891. The jury found four of the defendants not guilty, and asked the judge to declare a mistrial for the three remaining accused murderers, as no evidence had linked them to the crime. Outrage swept though the city after the verdict was read, and many of the jurors were threatened and harassed as they left the courthouse. Records show that some of the jurors who had voted for acquittal were fired from their jobs the following day. The six Italian defendants, though acquitted, were not permitted to leave jail.

The following morning, an ad appeared in the newspaper calling for concerned citizens to meet at the Henry Clay statue near the prison, urging them to "rise up" and be "prepared for action". The ad had been placed by a group calling themselves the Committee on Safety-- a group of about 150 local civic leaders and businessmen who met the previous night to discuss revenge against the Italians.


With a lynch mob assembling and the acquitted Italians held captive at Parish Prison, it was clear what was going to happen next. Pasquale Corte, the Italian consul in New Orleans, urged governor Francis Nicholls to intervene, but the governor-- himself an anti-Italian bigot-- refused to act. As for Mayor Shakspeare,  he had gone out to breakfast and could not be reached. As the mayor ate his breakfast, speakers whipped the crowd into a froth at the Henry Clay statue, and the mob-- comprised equally of white and black citizens-- marched to the prison, chanting "We want the Dagoes" and other slurs.

Prison warden Lemuel Davis let 19 of the Italian prisoners out of their cells when the mob began breaking down the door with a battering ram, urging them to hide. The carefully-executed lynching, however, proved that much planning had gone into the attack, and very few of the Italians were able to escape. One of the victims, Emmanuele Polizzi, was hauled out of the prison, hanged from a lamp post, and shot. Antonio Bagnetto, a fruit vendor, was hanged from a tree and shot. Nine others were shot or beaten to death inside the prison. As the bullet-riddled bodies of Polizzi and Bagnetto were left to hang, members of the mob hacked their bodies to pieces, taking toes and fingers as souvenirs.

Although the identities of the lynchers were obvious, none of them were ever arrested or brought to justice. The "execution squad" had been organized by attorney William S. Parkerson and three other civic leaders (lawyer Walter Denegre, politician James Houston and newspaper editor John Wickliffe), and the lynch mob included future Louisiana governor John M. Parker and future New Orleans mayor Walter C. Flower.

Astonishingly, newspapers across the country praised the lynch mob for what they had done. The following day, the New York Times wrote:

These sneaking and cowardly Sicilians, the descendants of bandits and assassins, who have transported to this country the lawless passions, the cut-throat practices, and the oath-bound societies of their native country, are to us a pest without mitigation. Our own rattlesnakes are as good citizens as they... Lynch law was the only course open to the people of New Orleans.

Even Theodore Roosevelt, who was serving on the U.S. Civil Service Commission at the time, praised the actions of the lynch mob. In a letter to his sister, Anna Roosevelt Cowles, on March 21, he wrote:

Monday we dined at the Camerons; various dago diplomats were present, all much wrought up by the lynching of the Italians in New Orleans. Personally I think it rather a good thing, and said so.

The Origins of Columbus Day


Insult was added to injury on March 17, 1891, after a grand jury was called to investigate the lynching. The presiding judge, Robert Marr, happened to be close personal friends with several member of the lynch mob; therefore, it was not a surprise when his grand jury ruled that none of the participants could be arrested because none of its members could not be identified.

This insult created shockwaves back in Italy. The Italian government demanded reparations be paid to the victim's families. When the federal government declined, the Italian government recalled its ambassador from Washington in protest. As U.S.-Italy relations deteriorated and anti-Italian violence in America continued (eight more Italians would be lynched in Louisiana alone during the 1890s), there were rumors that Italy would formally issue a declaration of war against the United States.


By the following year, which also happened to be the 400th anniversary of Columbus' arrival in the New World, the relationship between the two nations had become so strained that President Benjamin Harrison, in an attempt to placate American citizens of Italian descent, declared  Columbus Day a national holiday. Harrison also paid $2,211.90 to each family of the eleven victims.

Unfortunately, the March 14, 1891 lynching of Italian-Americans, which remains the largest mass lynching in American history, has been almost entirely forgotten in the United States, removed from history books and scrubbed from the biographies of the cold-blooded bigots who either played a direct role in the murders or condoned them-- bigots who went on to become mayors, governors and (in the case of Teddy Roosevelt), even presidents.

Italian-Americans, however, have not forgotten the incident, and that is why many of us who are of Italian ancestry consider the destruction, vandalization and removal of Christopher Columbus statues as an open attack on our heritage, and a further attempt to whitewash and re-write one of the most shameful chapters in American history.

But what about those who insist that Columbus himself was a blood-thirsty tyrant and killer? While this may certainly be the case-- his atrocities against the Taino people have been well documented-- the timing of the incident and its proximity to the 400th anniversary of the explorer's arrival in the Americas made Christopher Columbus the only rational choice for President Harrison's peace offering to Italian-Americans. Sure, there were better options, but erecting statues of Leonardo DaVinci or Lazzaro Spallanzani wouldn't make much sense to the average American citizen.

The vast majority of Columbus statues were erected across the United States in the years immediately following the lynchings, which proves that these monuments were not at all intended to "glorify" a single flawed human explorer, but to apologize to the millions of Italian immigrants living in America at the time for the atrocities committed against them. And for this reason we as a society must preserve these statues before the horror of March 14, 1891 is permanently erased from our collective memory.