The Truth Behind the Wayfair Human Trafficking Conspiracy 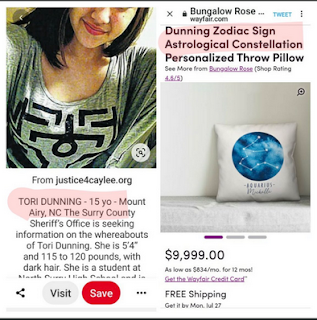 The Twitterverse exploded early Friday after a Reddit user claimed a day earlier that exorbitantly priced cabinets sold under names of missing girls were proof of that Wayfair is operating a human trafficking ring. These cabinets, sold by Wayfair as part of its WFX Utility collection, were priced between $12,699.99 to $14,499.99 and were listed under the names Aanyah, Alyvia, Kylah, Neriah, Samiyah and Yaritza.

Interestingly enough, these names also happen to match the names of young females who had been reported missing. And, as if that didn't raise enough eyebrows, Reddit conspiracy detectives soon pointed out that entering the SKU numbers of these cabinets into a Russian search engine, Yandex, resulted in images of child pornography. As the rumors continued to spread like wildfire, Wayfair quietly yanked the listings, which only seemed to convince conspiracy theorists that they were on the right track. One Twitter user wrote:

They deleted everything off their site an hour or two ago. My friend took screen shots of everything she could. Seems like they are absolutely scrambling at this point. Something is wrong here. Looks like the internet busted a child sex trade front. I really hope they go down.

These facts were enough to make the allegations against Wayfair go viral, prompting a response from the company:

"There is, of course, no truth to these claims. The products in question are industrial grade cabinets that are accurately priced. Recognizing that the photos and descriptions provided by the supplier did not adequately explain the high price point, we temporarily removed the products from site to rename them and provide a more in-depth description and photos that accurately depict the product to clarify the price point."

Unfortunately, this half-hearted explanation did little to answer the questions being posed on Twitter and Reddit. Why would a company feel the need to give feminine names to industrial cabinetry in the first place? And why did each of the names coincide with a girl who had been reported as missing?
As amateur sleuths continued to investigate, they came across other similar products. All of them overpriced, and all of them named after a missing girl. There were listings for $9,999 decorative pillows named Duplessis and Dunning, which seemed to tally with Tori Dunning, a 15-year-old from North Carolina who disappeared under mysterious circumstances, and Samara Duplessis, a 13-year-old who had gone missing in Michigan. 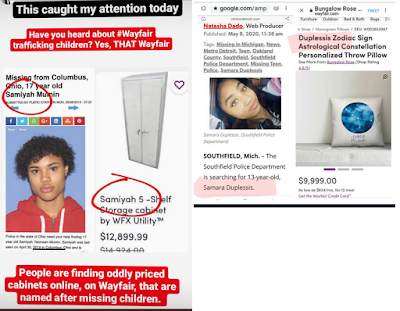 Other amateur investigators offered various explanations refuting the sex trafficking allegations. While it's true that SKU numbers entered into Yandex produced images of children, none of the images are pornographic. Also, as it turns out, any 7-24 digit SKU number typed into Yandex produced similar images, regardless of the retailer. Does this mean that Walmart, Target and Best Buy are also in on the game?

While it's always more intriguing to believe the most outrageous explanation-- that Wayfair is selling young girls-- in the end, the more mundane explanation usually turns out to be correct.

One mundane, but highly probable, possibility is that Wayfair is simply using AI software to choose the item names based on a variety of search metrics in order to improve SEO value, thereby placing higher in Google search results. In other words, if we were to translate a mathematical algorithm into plain English, it might sound something like, "A lot of people have been performing Internet searches for Samara Duplessis, so let's call one of our cabinets Samara and one of our pillows Duplessis." 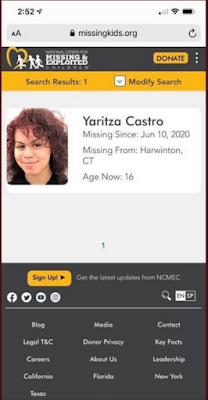 Without wading too far into the weeds of search engine optimization, the objective is to generate a name that is both popular yet unpopular at the same time. After all, a name like Yaritza Castro is a bit more unique than, say, Selena Gomez or Miley Cyrus. If Wayfair named a sofa "Selena" or a lampshade "Miley", there's a good chance the item would get buried beneath a trillion other search results. But Yaritza is perfect, because the missing girl has earned just the right amount of online notoriety to land a retail item named "Yaritza" in the highly-coveted "sweet spot" of search rankings.

This would also explain Wayfair's vague and dubious explanation to the human trafficking charge. Naturally, if Wayfair went on record admitting that it was exploiting the names of missing children in order to sell cheap, Chinese-made furniture, it would be a public relations nightmare. Sadly, Wayfair's refusal to come clean on this matter only makes them look like they are hiding something.

But what about the ridiculous prices? Ten grand for a chintzy throw pillow that should retail for about ten bucks? Well, here's the ugly truth.

This is also a distasteful, yet not uncommon, marketing tactic. Several years ago, I had a freelance "job" writing glowingly positive (yet 100% bullshit) product reviews for a major online beauty retailer. Whenever a new product was listed on the site, the company would intentionally make the price so ridiculously high that the only people who could find the listing for it were the people the company had paid to write a positive review for it. Since no one in their right mind was searching for a $12,000 tube of lipstick, it made the item easy for us to find, and allowed us to write our glowing reviews long before a legitimate customer beat us to the punch and wrote a bad review. After the item in question had earned a handful of positive reviews from people like me (paid reviewers), the company would then change the listing to the actual retail price. This way, by the time a customer sees the listing, it will appear as if the product had earned several rave reviews, and not a single bad review.

Of course, common sense should tell you that Wayfair is not dabbling in the flesh trade;  there are tens of thousands of items on the site-- chairs, futons, desks, beds, sofas, you name it-- that have human names that are not the names of missing children. In fact, one of the missing girls named by conspiracy theorists (who has since been found), made a video after hearing about the Wayfair conspiracy, angrily insisting that she was not for sale. Case closed.

It would appear that, for some strange reason that only artificial intelligence can comprehend, names of missing children were intentionally chosen for a line of industrial cabinets because of their search engine value. This, of course, illustrates one of the inherent drawbacks of AI. Artificial intelligence doesn't give a whit about insensitivity or bad taste. All of its decisions are rooted in cold, heartless logic.

In other words, AI determined that it would be more effective to name an industrial utility cabinet Yaritza than a name like Hank, which, at first glance, would seem like a much better choice.

While Wayfair may not be guilty of human trafficking, the company's pitiful explanation seems to suggest that Wayfair is guilty of exploiting missing children in a totally different manner-- using the search engine value of their names in order to move merchandise.