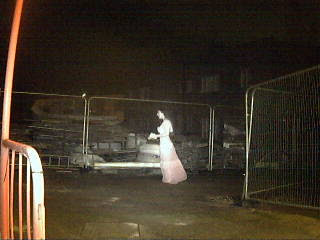 By now, even those who have little to no interest in paranormal activity have weighed in the photographs that are circulating online of a white-clad woman caught on security camera strolling through a construction site on Sherborne Street in central Birmingham in the UK.

According to multiple news outlets, the footage was captured at 1:53 am on the morning of August 18 by a motion-activated CCTV camera owned by Limitless Security, which had been contracted to keep an eye on the construction site. Birmingham Live reported that manager Adam Lees received an alert on his home computer at around 2:00 am that something had managed to trigger a motion sensor camera at the construction site.

"The images come through to my laptop, so I checked and saw that picture. I notified security on site straightaway who did a full patrol but found nothing," said Lees. "It's incredibly strange. I have no idea what it could have been, but I didn't sleep the rest of the night."

It was the daughter of a Limitless Security employee who first posted the image on Twitter. The image has been shared thousands of times since it was posted by a user whose handle is _Meglittle.

Along with the photo, she tweeted:

"So my dad's building site in Birmingham has a CCTV camera alert that flashes when there's movement and this morning it took this photo. Ten minutes later security went to check and found NOTHING."

The Limitless Security website was quick to pounce on the seemingly ineffectiveness of its own services, stating:

While the image has left thousands of people claiming this is irrefutable evidence of ghosts, there are far too many tip-offs that the camera in question captured a living, breathing human being. Of course, there are too many gaps missing in the story to determine if this was a hoax-- or simply a woman walking through a construction site at a very late hour.

For starters, there is the fact that the image lacks any of the signature transparency commonly associated with apparitions. In other words, at first glance, the image is just too "perfect".

As you can see, by tinkering with the brightness and contrast using any basic photo editing program, it becomes 100% obvious that the woman in the picture is a solid object. If this were an apparition, for instance, we would expect to see the solid portion of the fence in the background extending through her body. Yet, when we enhance the photo to maximize the amount of ambient light and reduce the appearance of shadows (photo #4), there is no trace of the solid portion of the background.

Of course, with a security camera its hard to improve the resolution, but by tinkering with the exposure and color saturation, one can see that the woman in the photo has crisp, clear, definite lines and angles (photo #3), as opposed to a gauzy, vaporous outline one would expect to see in a non-solid object. 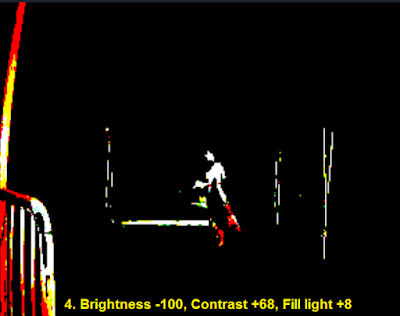 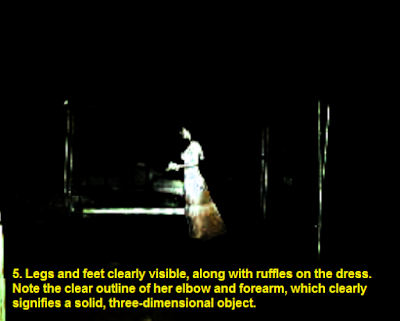 One must also ask why Limitless Security turned the image into a marketing gimmick within 3 days of the incident.


We recognise the requirement to reduce the cost of break-ins, thefts and damage to building sites, whilst maintaining and managing the costs of security within acceptable limits.

Our VIDAR system is designed to provide 24/7 protection by detecting intruders and capturing clear images, such as this one, for full visual verification. It is at the heart of our managed service which provides a unique package of building site management and security solutions including detection, monitoring and response.

We are not sure this intruder was intending to steal anything, but at what point do you decide to install security measures on a construction site? Do you wait until you consider the value of theft or vandalism exceeds a projection of site security cost before you take action?


The article then turns into a sales pitch for Limitless Security's services. Is this a case of a company seizing an opportunity? Or did someone behind the scenes at Limitless manufacture an opportunity?

A telling detail can be found in the article featured on the company website, in which they state that the photo "clearly depicts a woman floating, with a translucent dress". The article then brags about how the story has been covered by The Sun, The Mirror and Birmingham Live.

Not only is this statement patently absurd (as you can see by our enhanced photo below, the woman in neither "floating" nor "translucent"-- one can clearly see the outlines of her calves and feet and the ruffles of her dress), it reeks of a publicity stunt.

If it's not a hoax or publicity stunt, then why have we only seen a single image and not a full video clip?

Another interesting facet of the story is how the woman seemingly "vanished" into thin air, yet Limitless Security stated that took a full ten minutes for security personnel to arrive on the scene. Even a woman in a wedding dress wearing high heeled shoes can cover a lot of ground in ten minutes! 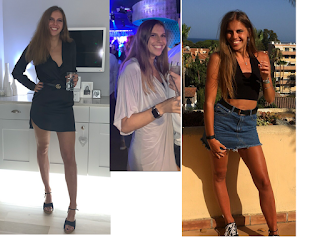 And finally, although we're not making any accusations, it's worth pointing out that the woman who first posted the image on Twitter-- the daughter of the man who "discovered" the apparition-- looks an awful lot like the "ghost woman" in terms of height, body shape, hair length, fashion sense.... and even posture.

Sorry, Limitless Security, but we're going to have to call your "ghost" bogus!