The Mystery Suicides of the RMS Lucania


Founded in 1840, the Cunard Line is the world's best-known operator of luxury ocean liners. Several of its ships have been awarded the Blue Riband-- an honor bestowed upon ships crossing the Atlantic in record time. Of the thirty-five liners to have held this honor, thirteen were ships owned by the Cunard Line (in contrast, the fabled White Star Line only boasted five Blue Riband vessels, and the Titanic was not one of them).

One of Cunard's Blue Riband vessels was the RMS Lucania, the sister ship to the RMS Campania, which became the largest ocean liner afloat when she was launched in September of 1892. The Lucania, which was launched the following February, earned the Blue Riband on only her second voyage. The Lucania also made history in June of 1901, when she became the first ship to be equipped with a Marconi wireless system.

While the Lucania was perhaps the most famous ocean liner in operation until it was scrapped after a fire in 1909, there are several less historic firsts associated with the ship, such as the fact that, in April of 1909, the Lucania was the first ship to experience two suicides on a single Atlantic crossing.

It was April 14, 1909, when a wireless operator in Liverpool received word that two beautiful young women, Margaret Clarke and Helen Miller, had died from self-inflicted gunshot wounds to the head four days apart. What made the story even more remarkable was that the passengers had never met before they boarded the Lucania in New York.

One the day before the ship sailed, Margaret Clarke showed up at the Cunard office and obtained a second-class stateroom. She gave her address as 66 Clinton Street. The following morning, just as the Lucania was about to set sail from New York, a young woman giving her name as Helen Miller burst into the same office in a state of high excitement. "I simply must have passage on this boat," she pleaded. "I cannot tell you how important it is that I leave on the Lucania." She was accompanied to the office by a man she said was her brother, though she refused to provide an address.

The two young women were assigned to the same stateroom. Shortly before daybreak a shot was heard. The ship's officers rushed to the stateroom and found Margaret Clarke lying on the floor with a bullet in her brain. Four days later another shot was heard. Helen Miller had ended her life in the same manner. On April 15, the two women were buried at sea. 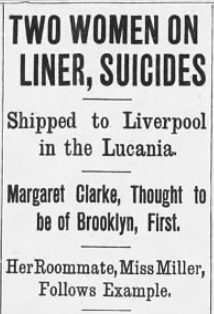 The facts surrounding this bizarre double suicide raise more question than they answer. An investigation revealed that the women had been perfect strangers when the ship left New York, and Passenger Agent Walker told company officials that Clarke and Miller been booked into the same stateroom by mere chance. Upon  further investigation it was revealed that the address Margaret Clarke had give, 66 Clinton Street, belonged to the Long Island Historical Society. When questioned, members of the historical society had no knowledge of Ms. Clarke.

Some of the passengers stated that the girls had immediately hit if off and became close friends, and it was suspected that the suicide of one may have unhinged the mind of the other.

However, one of the ship's passengers, after reaching Liverpool, told a reporter from the London Chronicle that there could be a more sinister explanation-- that Margaret Clarke and Helen Miller had belonged to a secret "suicide society". He based this theory on the fact that neither woman had brought much luggage or personal belongings with them (Clarke was found to have just six shillings on her person at the time of her death, while Miller has just one shilling), and the strange coincidence that both young women should be traveling with separate, yet nearly identical, revolvers. Yet other passengers stated that the women appeared to be in good spirits, mixing freely with the other passengers and taking part in games and activities that were held on board.

So what really happened in that second-class stateroom? The Cunard investigation drew no conclusions and the ship's crew were baffled. Because the deaths occurred in international waters, there was no inquest or formal investigation held in the United States or Britain, leaving the deaths just one of many unsolved mysteries of the sea.

The Lucania made just one more voyage after this incident, in July of the same year. While being laid up at Huskisson Dock in Liverpool on August 14, 1909, she was completely gutted by fire, causing her to partially sink in her berth. The cause of the fire, which firefighters battled for nearly sixteen hours, was never discovered.

It is interesting to note that, by the time the Lucania took her final voyage, she had already become obsolete. In 1907, the Cunard Line finished construction of the liner that would replace her: the ill-fated RMS Lusitania.