The Witch Camps of Ghana

The city of Accra on the southern coast of Ghana is a booming metropolis of over 1.6 million people. With over a dozen colleges and universities and a host of theatres, museums and excellent shops and restaurants, the modernity of this city dispels many erroneous notions about Africa. But in the northern part of Ghana, where centuries-old traditions are still firmly entrenched in everyday life, there exists several bizarre and mysterious settlements. Known as "witch camps", these settlements are sanctuaries for Ghanaian women who have been accused of practicing witchcraft.

Presently, there are six major witch camps that are known to exist in Ghana, providing refuge for nearly one thousand women who would otherwise be killed by neighbors and village witchdoctors. And while the national government has embarked on a campaign to educate the rural population about the non-existence of witches, groups such as the Anti-Witchcraft Allegations Campaign Coalition-Ghana and the international organization Action Aid have reported that the populations of these witch camps has been growing steadily in recent years. 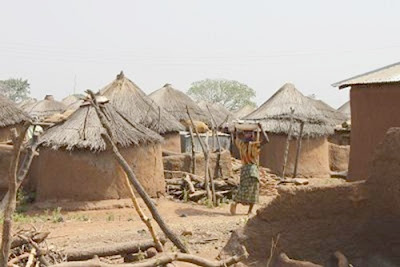 These camps are places of shame-- the equivalent of a modern-day leper's colony-- from which very few escape. Inside these camps, a witch's guilt or innocence is often determined not by a jury or a panel of mental health experts, but by the slaughtering of a chicken; if a chicken dies with its feet in the air, the accused woman is formally declared a witch and she is condemned to live out the rest of her natural life as a prisoner. On the other hand, if the chicken dies with its feet on the ground, the woman is not guilty of being a witch-- but she is still forbidden to leave the camp because she now wears a stigmata that marks her for death if she should live among the outsiders. At any rate, it's a no-win situtation for these prisoners of superstition.

“Even if the ritual says she’s innocent, there will be members of the community who will feel unsafe," explained Adwoa Kwateng-Kluvitse of Action Aid to the Los Angeles Times in 2012. "The witch camps are effectively women’s prisons where inmates have been given no trial, have no right of appeal but have received a life sentence.”

In many parts of Ghana, a woman can be accused of witchcraft for virtually any reason. If a village should suffer any type of calamity, from an outbreak of disease to the death of a child, many will believe that a witch is to blame for the misfortune. Some women are accused simply because they had appeared in another person's dream.

Of all the witch camps in Ghana, perhaps the most famous is the camp at Gambaga, in northern Ghana. This camp's history dates back to the 18th century, and is built on an area that was once the capital city of the ancient Mamprusi kingdom. For centuries, women accused of witchcraft have sough refuge at the Gambaga witch camp because once a woman is accused of this crime, she is ostracized from her community, and is forced her to depend on her own wits, or the charity of strangers, for her very survival. That is, until her innocence of guilt is determined by a tindana, or witch doctor.

If the witch doctor determines the woman is indeed a witch, there is still some hope for her; a cleansing ritual can be performed to neutralize her power. But there's just one catch: The "cure" is only effective so long as the witch remains close to the shrine where the ritual was performed. Because of this, it is not uncommon for these women to be exploited; at Gambaga, in exchange for being "cleansed" by the witch doctor, the woman must pay him and provide labor in his fields. In essence, the witch is forced to pay for the privilege of being a slave, because the the only other alternative is certain death.

So why does witchcraft continue to flourish in Ghana well into the 21st century?

The answer, it seems, is that the people of Ghana have always been extremely religious, and every religion is rooted, at some level, in superstition. According to a 2012 Gallup poll, Ghana ranks as the world's most religious country, with 96% of its population identifying as religious. Even though Europeans who colonized the Gold Coast introduced Christianity to the people of Ghana, the Ghanaians found that Christianity was perfectly compatible with their own traditional spiritual beliefs. Rather than displacing superstition, Christianity seemed to confirm the power of superstition, and, because of this, Christianity and witchcraft were allowed to coexist. 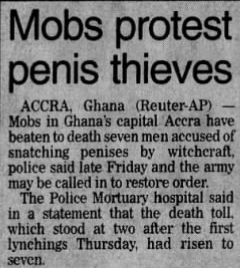 While the majority of witch camps are populated by female inmates, there are instances in which men have been accused of practicing witchcraft. One famous incident occurred not in the jungles of northern Ghana, but in the center of the nation's thriving capital city. In 1997, seven men were beaten to death by an angry mob in Accra after they were accused of supernatural "penis snatching". According to news reports, the accused male witches "caused some men's penises and some women's breasts to shrink or vanish" by way of a magical handshake.