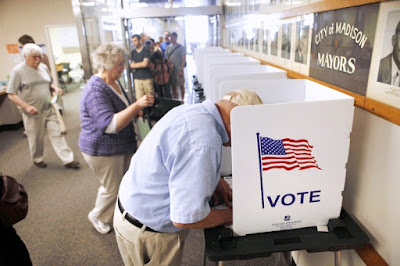 It's been a while since we've published a political article (regular JOTB readers may recall our groundbreaking "Politics of the Paranormal" study in 2017) and even longer since we've dipped our toes into election forecasts, but since history has consistently proven us to be more accurate than folks like Nate Silver ("Hillary Clinton has a 71% chance of winning!"), we thought we'd emerge from our psephological hibernation, put the analytical skills of our crack staff of researchers to good use (all two of us), and come up with our own prediction model for the 2020 Presidential Election based on a number of factors that the "other guys" haven't bothered to take into consideration-- such as the impact of third-party candidates, and losses and gains in state political party registrations since the last presidential election.

And what our numbers tell us is surprising, to say the least.

Although more than 70 million Americans have already cast their ballots, there will be plenty of Election Day upsets and surprises. For instance, our model shows that the outcome of the election may not hinge on the expected battleground states of Pennsylvania or Florida, but on the great state of Minnesota. And the biggest factor in the outcome of the 2020 election won't be Hunter Biden's laptop, the confirmation of Amy Coney Barrett to the Supreme Court, or Trump's handling of coronavirus-- but the ability or inability of Green Party candidate Howie Hawkins and Libertarian candidate Jo Jorgensen to obtain ballot access in several important states.

Based on our research, we make the following predictions:

-Wisconsin will flip, and its 10 electoral votes will go to Biden.

-Pennsylvania will flip, and its 20 electoral votes will go to Biden.

-Michigan will flip, and its 16 electoral votes will go to Biden.

-Minnesota will flip, and its 10 electoral votes will go to Trump.

While this seems to indicate an easy victory for Biden, our scorecard still has Donald Trump winning by a razor-thin margin, with 270 electoral votes going to Trump, and 268 going to Biden.

Here is our state-by-state breakdown:

Arizona (11). While virtually every poll has Biden winning comfortably (Patinkin has Biden up by 7 points), we predict a narrow Trump victory. In fact, this will be Trump's slimmest margin of victory of the election. In 2016, Green Party candidate Jill Stein was able to siphon over 25,000 votes away from Clinton, clearing the runway for a 4-point Trump win. This time around, the Greens will have Howie Hawkins as a write-in, and Libertarian candidate Jo Jorgensen should match-- if not exceed-- Gary Johnson's 80,000 vote total from 2016. Expect Trump to beat Biden by less than 2 points. (T: 48.5%  B: 47%  Net result: Trump +1.5).

Florida (29). Trump improves on his 2016 vote total, but it'll still be too close for comfort. Our hospitality industry insiders tell us that it's hard to find a hotel room because election lawyers have already snagged them up. A strong Libertarian turnout for pro-immigration candidate Jorgensen should allow her to vacuum up some potential Biden votes. We have Trump winning by 2 points. (T: 48%  B: 46%  Net result: Trump +2).

Michigan (16). The latest Reuters poll has Biden up by 9 in this state that Trump won in 2016. Biden will win, but the margin will be much, much slimmer, thanks to a crowded ballot with Hawkins and Jorgensen. Look for this one to be decided in court. (B: 46%  T: 45%  Net result: Biden +1).

Minnesota (10). Our numbers show that Trump will lose the election if he doesn't win Minnesota-- a state Clinton carried in 2016 by fewer than 44,000 votes. Fortunately for Trump, he'll have both Jorgensen and Hawkins to plunder Democrat votes; third-party and independent candidates received over 150,000 votes in 2016. Of these, slightly more than 53,000 went to never-Trump uber-conservative Evan McMullin. Since Hawkins and Jorgensen lean left, it's a safe bet that most McMullin voters have migrated to Camp Trump, thereby giving him the support he needs to close the gap. And his bromance with Mike Lindell just might give Trump the three inches of wonderful he needs to win. Despite the latest Gravis poll having Biden up by 14, we believe Trump will squeak out a narrow victory. (T: 46.5%  B: 44.5%  Net result: Trump +2).

Pennsylvania (20). We see the Keystone State flipping from red to blue in 2020. We ought to know-- we live here. The problem for Republicans is a federal court ruling earlier this year which effectively made it impossible for third-party candidates to obtain ballot access (see Libertarian Party of PA v. Gov. Wolf). While the Libertarians somehow managed to obtain the petition signatures necessary to secure Jorgensen's spot on the ballot, the Green Party wasn't so lucky. Green party candidate Jill Stein stole 49,000 votes from Hillary Clinton in 2016. The result? Trump won Pennsylvania by only 68,236 votes. And while the Libertarians have a candidate on the ballot, the Constitution Party does not. In 2016, Darrell Castle managed to nab 20,896 votes. Since the 2020 candidate, Dan Blankenship, failed to secure ballot access we're predicting a slim Biden win, bolstered by what we predict will be record-setting Democrat turnout. And, for the record, there are more registered Democrats in Pennsylvania than Republicans. (B: 48%  T: 47%  Net result: Biden +1).

Wisconsin (10). Trump bested Clinton here by 1 point in 2016. This time around, the script will be flipped. The latest SurveyMonkey poll shows Biden leading by 13, but we say it's going to be another 1-point decision. Why? Because Howie Hawkins will not be on the ballot. Count on those 31,000 Green Party voters to vote for Biden. (B: 48%  T: 47%  Net result: Biden +1).