The Haunting of the Bernardi Farm 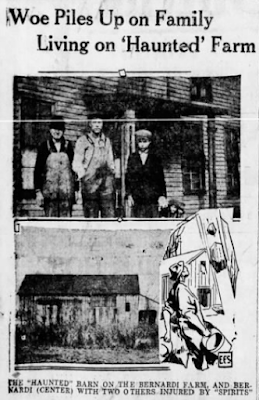 Known primarily as a Midwestern railroad hub, the Illinois city of Danville was founded in 1827. When coal was discovered in the region a few decades later, Danville quickly grew from a small farming village into an industrial city. But even as factories were erected and automobiles crowded the booming downtown, the city never strayed too far from its agricultural roots. During the 1920s, one farm became locally famous, not for the quality of its crops of the variety of its produce-- but for a hair-raising haunting that defies explanation to this day.

Frank Bernardi was a quiet, unassuming dairy farmer. Early every morning he got out of bed and went about his business, just as he had done every other morning. It was a mundane, uneventful sort of life, and since Frank Bernardi was a mundane, unevenful person, the drudgery suited him just fine-- until a cold February day in 1927 when a lump of coal dropped from a clear and cloudless sky, missing him by mere inches.

Of course, while these types of events are uncommon, they are not unheard of, and they usually have perfectly rational explanations. Things can fall out of the sky for a variety of reasons-- distant explosions, careless aircraft, and freak storms have all been known to cause such incidents. But when a large rock, or a smallish boulder, to be more accurate, hurled past him and crashed into the side of his barn as if fired from an unseen cannon, he knew something strange was in the air, and it wasn't a storm. The large rock seemed to have been hurled from the direction of a flat, open field. It hadn't plummeted vertically like the lump of coal, but had traveled-- with incredible force-- in a horizontal trajectory.

Frank's search for the cuplrit proved fruitless, but the flying fragments of rock continued to torment the Bernardi family for several days, until the family appealed to Fred Juergens-- Frank's father-in-law, to stay with them and try to sniff out the source of the mystery. On his first night at the farm, just after climbing into bed, a chunk of coal fell on top of his head, inflicting a scalp wound. Fred was beyond baffled; there were no holes in the ceiling, no open windows, and no place inside the upstairs bedroom for a prankster to hide.

But the strangest, and most inexplicable, occurrence of all was the black ooze.

Frank Bernardi was a dairy farmer, and despite the great care he took in milking his cows and skimming the milk, an ugly black substance began to appear in the bottoms of his bottles. It could not have been due to unsanitary conditions, however; Frank passed the fresh milk through specially prepared fabric fiters before the milk was poured directly into scalded glass bottles.

"No human hand could ever do such a thing," Bernardi assured newspaper reporters in 1927 when they came to have a look at the haunted farm for themselves. Even more perplexing was the fact that Bernardi, upon examining his milk bottles, discovered some of them contained chicken bones.

The Bernardi family certainly had no financial incentive for cooking up a hoax; the bizarre affair caused him to lose most of his daily customers, and the constant influx of curiosity-seekers trampled his fields and demanded entry into the farmhouse. Rose, the infant daughter of the tormented family, contracted pneumonia from the unwelcome guests and had to be hospitalized.

It wasn't until a loud crash ("as if an engine had been dropped through the roof", said Frank) shook the barn to its foundation that the authorities were summoned. The sheriff, along with three heavily-armed deputies, made a thorough investigation of the Bernardi farm, but failed to find the source of the noise.

Frank Bernadi was at wit's end, until he was told about the history of the property. He eventually learned that the former owner of the farm, John Jones, hanged himself in the barn after his son squandered all of Jones' $8,000 in savings. It also didn't help matters that a woman by the name of Elsie Cochrane had been found murdered near the farm several years earlier, or that a black family who once owned a nearby farm burned their buildings to ground and fled in haste, claiming their property was haunted. There were, as it turned out, plenty of supernatural suspects in the Bernardi haunting, but no concrete answers.

The paranormal activity ceased as suddenly as it had begun, but no satisfactory explanation for the 1927 hauntings has ever been produced.