The Haunted History of Quindaro 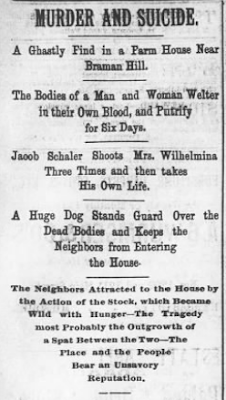 The year is 1889. In a lonely little farmhouse a few miles miles west of Kansas City, Kansas, the putrifying bodies of Wilhelmina Miller and Jacob Shaler are found by neighbors, setting the stage for an epic tale of murder, mystery-- and paranormal activity. As it would turn out, this quaint farmhouse, unassuming in appearance, would boast seven violent deaths and establish a reputation as being one of the most haunted sites in the state of Kansas.

Hidden away in a dark glen just south of the historic runaway-slave settlement of Quindaro, about three quarters of a mile south of the road presently known as Parallel Parkway, once stood a 30-acre farm. In the spring of 1867 Mrs. Wilhelmina Miller purchased this property, and moved into the tiny three-room farmhouse with her husband. In the fall she hired a young man by the name of Manz, who soon became her lover. Mrs. Miller and her paramour flaunted their romance openly while the cuckolded husband silently stood by and brooded over the predicament. Then, one day, while his wife and Manz were cuddling cozily on a sofa, Miller crept up behind them and blew the top of Manz's head off with a shotgun. He then fled into the woods, and the following morning he was found hanging from a rafter in his barn.

Wilhelmina Miller didn't appear the least bit phased by this murder-suicide; in fact, two weeks later she invited an old soldier to come live with her. The following year, Mrs. Miller once again hired a younger man to tend the farm and, once again, she found herself entangled in a bizarre love triangle. However, the old soldier had enough sense to pack up his belongings and leave. As for the young farmhand, Theodore Seidrich, he died in 1881 after taking medicine which had been given to him by Wilhelmina. By all accounts Seidrich's untimely death was accidental, and it was widely reported that Mrs. Miller was disconsolate after Seidrich's overdose. The middle-aged woman simply could not bear the thought of living alone, and before Seidrich's body was cold and in the ground she found comfort in the arms of a new beau, John Fanschel. it seems that two years of cohabitation was all that Jacob could stand; for the January 2, 1890 edition of the Boston Globe reported that "the old woman made things so lively for Fanschel that he took refuge in the poorhouse."

Of course, by this time the house was in such bad repute that neighbors shunned it, and it eventually appeared that the Miller homestead had been abandoned. It was the nearest neighbor, Will Baker, who lived about a quarter mile down the road, who decided to investigate the matter on April 11, 1889, after Mrs. Miller's emaciated cattle had broken through his fence in order to find food and water.

Accompanied by a half dozen neighbors, Baker entered the farmhouse but was immediately driven back by a snarling dog. The men walked around to the east-facing window of the tiny house and peeked inside-- and discovered two lifeless bodies rotting in pools of dried blood.

Mathilda Miller was stretched across the bed, and the body of the unknown man was lying the floor, the dead man's dog guarding the corpse protectively. Baker sent a messenger to Kansas City with word of the gruesome find, and at around seven o'clock that evening Coroner Downs and Deputy Sheriff Bowling, accompanied by eager newspaper reporters from the Kansas City Gazette, arrived at the scene. When Coroner Downs examined Mrs. Miller's body, he found two gunshot wounds in her chest and another in her mouth. As for the man, who was later identified as Jacob Shaler, he was found on the floor with his head propped against a sofa, with a revolver tucked under his left ankle and a long-stemmed meerschaum pipe on the floor next to his corpse. Coroner Downs discovered a gunshot wound directly over Shaler's right ear-- a clear indication of suicide. 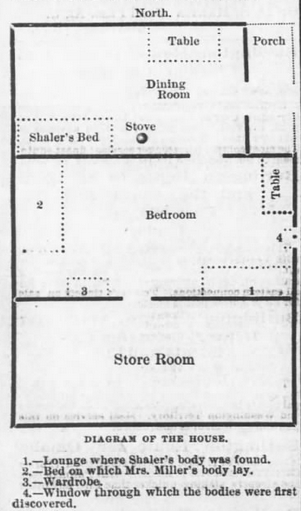 But the coroner also made another chilling discovery. While Mathilda's body was decomposed "almost beyond recognition", Shaler's body appeared much... fresher. This gave rise to theory that he had killed Mrs. Miller several days before turning the weapon on himself. But what had Shaler been doing in the meantime? It was Will Baker who had last seen Jacob Shaler alive about a week earlier on the Miller farm, but it had been much longer since anyone had seen Mathilda. The stomach cringes at what might have taken place during those days inside the cramped, tiny three-room house.

At any rate, Coroner Downs immediately had Mathilda's rotting body interred at the Old Quindaro Cemetery, and Jacob Shaler's corpse was buried in an unmarked grave in Potter's Field. But the mystery only deepened when one of the neighbors who had accompanied Will Baker to the scene of the tragedy told a bizarre tale about the the previous occupants of the house that was later purchased by the Millers. The old-timer, a fellow by the name of Metz, told the following story:

"Twenty-two years ago a strange couple moved into the house an cultivated some of the adjoining land. They kept to themselves, did not interfere with anybody's business, and so the neighbors did not learn their names. Twenty-one years ago this very night we came down to this house on the same errand on which we came this morning. not having seen them around for a week or so, and as sure as you stand there, sir, we found that man and woman in this same room, dead-- both with pistol shots in their head.

"Not having any friends, the county buried them, and no one to this day knows who they were or where they came from. I hardly think that anyone who knows the circumstances would wish to live in this house, and it will be avoided as a terrible spot."

Mr. Metz turned out to be correct; in late December of 1889 a young man named William Keeley was walking home along the Parallel Parkway and when he passed the abandoned Miller house he reported that he had seen orbs of light moving around the house and had heard the groans and cried of someone in extreme agony. When Keeley told his story to some of the locals they all had a good laugh at the young man's expense, but Keeley was vindicated a few days later after a traveling salesman passed through the vicinity and arrived at Will Baker's house in a state of high agitation. "Something is terribly wrong in that house back on the road," pleaded the stranger, who said that he had heard someone groaning as if in pain. Sure enough, the house the peddler referred to was the Miller farmhouse.

Once again, the neighbors banded together to investigate, and fruits of their investigation were published in the Boston Globe on January 2, 1890:

When they arrived at the spot all was dark, and they lay quiet for a short time hidden in some bushes near the house. About eight o'clock a light appeared at one of the windows, and then the whole house was lighted up. Groans and cries were heard. the party made a rush for the door when all was plunged in darkness, and a search revealed no signs of anyone having been there since the last tragedy.